In 2018, the National Reining Horse Association debuted its Novice Horse Derby, giving horses with limited lifetime earnings the opportunity to compete against other fledgling reiners. Now the NRHA Novice Horse Derby has a new name and a new sponsor in GlycoGuard®.

The GlycoGuard® Novice Horse Derby will be held during the NRHA Derby presented by Markel and takes place during both the Open and Non Pro preliminary rounds.  The 2021 premier event for 4, 5, 6 and 7-year-old reining horses is slated for June 19 – 27 at State Fair Park in Oklahoma City, Okla.

NRHA Senior Director of Corporate Relations & Communications Sammi Miller collaborated with GlycoGuard® Senior Sales Representative Caitlyn Caldwell to create this important new partnership. She said, “On behalf of the association, a huge thank you to Caitlyn Caldwell and GlycoGuard® for choosing to support this and come on board as a corporate partner.  For the past several years, this company has sponsored NRHA events consistently and their decision to become the title sponsor of the GlycoGuard® Novice Horse Derby will greatly enhance the growth of this division, the NRHA, and GlycoGuard®.”

The GlycoGuard® Novice Horse Derby will feature a $15,000 Open Derby and a $10,000 Non Pro division to horses who have won less than $10,000 before May 15, 2021. Horses may also be entered into the Derby, but cross entry is not mandatory and there are no nomination requirements to enter only the Novice Horse Derby.

Caldwell’s connection to reining goes back years.  She said, “I’ve worked with NRHA for over a decade with both competing and sponsorships. My goal with GlycoGuard® is to make product knowledge available to more owners and trainers.”

GlycoGuard® entered the equine health care scene just six years ago but it is already becoming a staple for the performance horse industry. The combination of being a unique and effective product, along with supporting major equine events across the board, has quickly brought increased brand awareness.

The product is ideal for protecting the health and careers of reining horses. Caldwell noted, “Equine athletes can experience stress on a daily basis. GlycoGuard® is a unique drug-free probiotic made from live active bacteria, and strong enough to reach the hind gut, where much of our equine’s discomfort comes from.  I hope it will be the first product you grab for complete gut health in your equine athletes and foals!”

For more information about GlycoGuard® and to read testimonials from some of the industry’s top professionals, visit GlycoGuard.com. 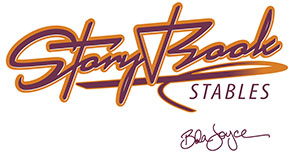 Competing at the National Reining Horse Association Derby presented by Markel is thrilling, and beginning in 2021, a new division has been added for Non Pros. The Story Book Stables Amateur Derby will debut this year, featuring $25,000 added money for this special segment of riders.

Creating this new opportunity was a goal for Brenda Joyce, owner of Story Book Stables – NRHA Corporate Partner since 2017. Brenda noted, “My husband, Rick Christen, and I are so excited to be sponsoring an Amateur Derby in conjunction with the NRHA Derby presented by Markel. As always, we want to support the grassroots of the industry and encourage newcomers. We believe that these groups are critical to the health, vitality and future of the Industry. So come on Amateurs, get ready for the Derby in June!”

NRHA President Rick Clark’s enthusiasm for this new division and the opportunities it will offer to reiners is palpable.  “I appreciate Brenda and Rick for their support in getting this going. They are willing to try something new and I predict that we will get a large number of entries in this division. We look forward to seeing new faces and new winners in the Story Book Stables Amateur Derby.”

To compete in the Amateur division at the NRHA Derby presented by Markel, the same horse and rider must be fully entered in the Non Pro Derby. Excluded riders include those whose NRHA Lifetime Earnings exceed $100,000 in Categories 1-12 as of Dec. 31, 2020. Also excluded are riders currently only eligible for Level 4 Non Pro only. Other exclusions include Youth riders, legal dependents of professional equine trainers, and spouses or legal partners of professional equine trainers.

The Amateur Derby Champion will be determined during the preliminary round of competition, which concludes on Tuesday, June 22, during the 2021 NRHA Derby presented by Markel.

For Immediate Release – February 20, 2021 – Oklahoma City, Okla. – In 2020, the Adequan® North American Affiliate Championships (NAAC) held during the National Reining Horse Association (NRHA) Futurity paid out an incredible $107,000 to more than 900 entries from all across the country. The fantastic prizes, large purses, and prestige of being a NAAC Champion helped the event grow, and it nearly doubled in size from the previous year.

The NRHA Board of Directors has announced the qualification criteria for the 2021 Adequan® NAAC. The rules for the current year are the same as in 2020 when the pandemic forced changes to accommodate both the riders and the local affiliates and Affiliate Regional Championships (ARC). The only addition is that riders must be an affiliate member to show at an ARC.

Once again, anyone receiving a score higher than a zero at an ARC will be able to enter that class at the NAAC in Oklahoma City. There are no requirements to compete at an ARC other than the rider must be a member of an NRHA affiliate, which they are encouraged to join beforehand. The objective of the NRHA Board is to encourage people to attend the ARCs and support the affiliate program without limiting the number of horses that attend the Adequan® NAAC.

“Numbers at the 2020 Adequan® NAAC grew by almost 100% and the competition was tougher than ever. Although there were multiple factors that led to this, including doubling the added money, the Affiliate Committee believes that the eased qualification structure was pivotal. It not only allows more people to come to Oklahoma City, but it is also easier to understand the process if you are new to the sport,” noted NRHA Affiliate Committee Staff Liaison Sara Honegger. “We want reiners to have a chance to enjoy competing at the Adequan® NAAC and don’t want circumstances out of their control to impact that.”

As in 2020, riders will be allowed to participate in multiple ARCs with one exception; if they win a class, they cannot compete on the same horse in the same class at another ARC.

“For example, a horse and rider that won the ARC Non Pro class at the Northwest Affiliate Regional Championships would not be allowed to compete in the ARC Non Pro class at the Southwest Affiliate Regional Championships,” Honegger explained. “We want to make sure that we continue to promote the affiliates and their membership, and the Affiliate Committee felt this was a good way to make sure those living in regions with more restrictions are still able to attend an ARC while also supporting an affiliate.”

Honegger added, “We are extremely grateful to all the sponsors and participants who made the 2020 Adequan® NAAC such a success and hope to continue that trend into 2021.”

For more information about NRHA membership or the NRHA Affiliate program, visit nrha.com/affiliate. On March 1 and 8, enthusiasts can relive all the action of the MS Diamonds TX Open Futurity, including NRHA Six Million Dollar Rider Andrea Fappani’s winning ride on All Bettss Are Off (Gunner x Wimpys Little Chic).

While the names and faces of the winners change regularly, Jenifer Reynolds and Chris Cook have been a constant presence over the past two decades. Co-owners of Sandbur Productions, which produces Horse of the West, they’ve captured the excitement and pageantry of the event for 19 years.

“At our first event in 2002, Chris was rolling as Shawn Flarida won on Wimpys Little Step with an incredible score of 233 – astonishing even to Shawn,” Reynolds recalled. “His reaction was the first major reining moment we recorded. We knew it was a big deal but didn’t realize how big at the time.”

She added, “We have covered the NRHA Futurity and Derby every year since then. We love the horses as well as the people and have particularly enjoyed watching the kids grow up. Cade McCutcheon was a toddler when we first met him, playing with NRHA Hall of Fame Stallion Hollywood Dun It. We’ve covered Caden & Lauren Hanson, Taylor and Jacob Zimmeran, Madison Rafacz, and others since they were in Short Stirrup classes. It’s been rewarding to see them grow into such earnest and polished performers.“

Both Chris and Jenifer have become fans of reining, first for the excitement of the sports and the incredible horsemanship, and then for the people and the horses themselves. They have become close with many of the participants.

“Being with our friends in the reining industry as they achieve their lifelong goals is always a thrill, but we’ve also shared a lot of pain and disappointment with them,” Reynolds shared. “It’s a bond that makes our work feel very personal, and that’s one thing we really like about it. When you work with people you care about, it makes you care more about your work.”

Horse of the West began in 2007 as Inside Reining, a 13-episode TV show for NRHA. With NRHA’s support, Reynolds and Cook elected to change the name to Horse of the West to underscore their ongoing efforts to draw a more diverse equine audience. The show now includes reining, cow horse, and barrel racing, and the show’s ratings have gone from 1.5 million yearly to more than 5 million in 2020 (Nielsen 18+AA). “We have achieved our goal of building a bigger promotional tent for the horse industry,” Reynolds shared.
The upcoming 2021 NRHA Futurity & Adequan® North American Affiliate Championships (NAAC) will mark 20 years of Sandbur Productions’ cameras capturing the event’s action.

“We’ll do what we always do – cover it as it happens. Since Chris and I both have a background in news coverage, we don’t try to choreograph anything ahead of time,” Reynolds said. “We just roll as the event unfolds and let each episode tell its own story. Being there to witness the action in real time and trying to capture its essence for our audience is what we do and what we love. We feel privileged to have been able to do it for two decades, but we’re still trying to figure out how we got this old.” As COVID-19 began to spread across the globe in 2020, changes and accommodations were made to every aspect of livelihood. As with every other industry, those involved with reining learned to evolve and adapt, evidenced by canceled and postponed shows. While many hoped the pandemic would slow in 2021, there are places still unsafe for people to safely travel.

“The European Executive Board and NRHA staff feel this is the best decision to move forward at this time,” noted Sam Oldfield, NRHA Director of Competition and Education and European Liaison. “Our management team for the event had been monitoring the situation closely and was prepared with dates should the March dates not prove possible. With the pandemic continuing worldwide, we felt it would be difficult for our European riders to travel across borders for the Futurity.”

While Oldfield is optimistic about the upcoming Futurity, noting COVID-19 protocols that will be in place at the event, she cautioned that the situation is still a fluid one. “As the pandemic is still prevalent in many areas, these new dates could still change. We will do our best to make decisions and notify our members as soon as possible should this be the case,” she said.

To keep up with the latest news about the European Futurity, visit nrhaeuropeanfuturity.com.