For Immediate Release – Oklahoma City, Okla., (March-06-2017) –  Held during the 2017 National Reining Horse Association’s Winter Meeting, youth members challenged themselves to learn more about their true self during the NRHyA’s Leadership Development Workshop. From February 10th through the 11th, youth members came out of the workshops with a better understanding of their strengths and how to use them to better themselves in the future. 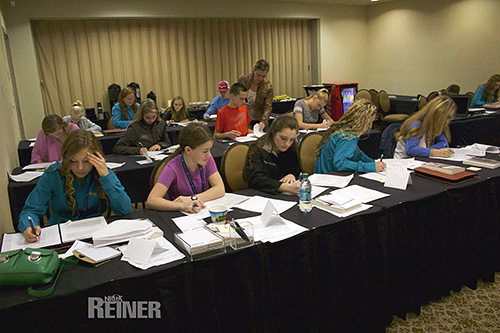 Leading the workshops was Director of Marketing at The Western Integrity Agency, Katie Hollingsworth, of Stillwater, Okla. Hollingsworth is passionate about helping others discover their strengths, and this unique opportunity offered insight to the next generation of equine industry leaders.

“It was a genuine honor to be a part of the 2017 NRHyA Leadership Development,” said Hollingsworth, “I could not have asked for a better group of young leaders to work with.”

Pre-registered youth members were given a personality assessment that asked questions revolving around 34 common themes. Each person’s individual themes lead them to five personal strengths. “Through our workshops, I learned what my strengths were and how to put them to use,” said NRHyA Historian Reagan Stephens, “It was fun learning that I had a unique set of strengths that defined me.” 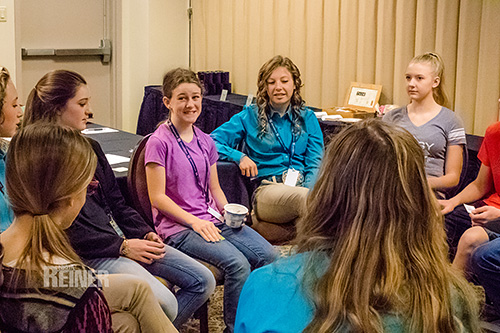 As the workshops progressed, youth members continued to develop and build upon their personal strengths. Youth members were put to the test as three teams were formed with varying personal strengths. “I learned that being on a team you don’t necessarily want to have the same kind of people,” said NRHyA Vice President Kenleigh Wells. NRHyA Treasurer Liz Blaser agreed saying, “Each person naturally took a role on the team based on their strengths.”

Teams were given a task to complete to see how the teams managed to work together despite opposing strengths.

When asked if aspects from the team building exercise resonated with students and if they would use the skills they learned in other aspects of their life, NRHyA Secretary Taylor Masson said, “I believe, as officers, we can use our own strengths to make a stronger and more compassionate leadership team for others. We can use our strengths to get more regions and youth involved with the NRHyA.”

Youth members who attended the 2017 NRHyA Leadership Development workshops came out with a better understanding of their strengths all while building lasting relationships with other youth members from across the nation.  “The workshops helped me become a stronger leader,” said NRHyA member Kate Lilley, “I learned things about myself that will help me in the future, I also made several new friends.”

“I would say that the NRHyA leadership symposium has helped me grow and expand my horizons in many ways that I am very thankful for,” said NRHyA Delegate Olivia Klug.