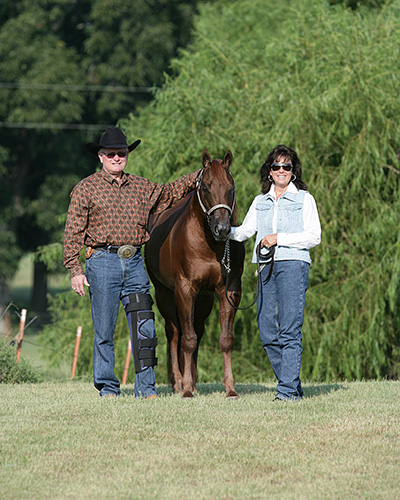 For Immediate Release – July 6, 2018 – Oklahoma City, Oklahoma – Before the commencement of the 2018 National Reining Horse Association (NRHA) Derby, NRHA all-time leading sire Topsail Whiz was sitting only $11,000 shy of hitting the historic 12 million dollar mark, and with only a few offspring competing in the open and non pro Derbies, it was unclear whether the legendary stallion would cross the threshold during the summer’s premier reining event. It only took one ride, however, to push ‘Whiz’ over – making him the only NRHA 12 Million Dollar Sire.

Topsail Whiz comes from a lineage of sires that greatly impacted the sport of reining. The 1987 chestnut stallion was sired by NRHA Million Dollar Sire and Hall of Fame Inductee Topsail Cody and out of Jeanie Whiz Bar. Bred by Tom and Susan McBeath and owned by Bob Loomis Reining Horses, Whiz passed away in 2009, leaving a hole in the reining world that only his progeny could fill.

With owner Bob Loomis on board, Whiz showed at six NRHA-approved events from November 1990 to April 1993. Boasting nearly $50,000 in NRHA Lifetime Earnings (LTE), the stallion’s top finishes in the show pen include: