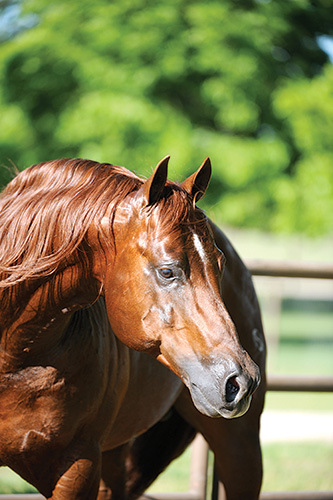 Smart Spook is a 17-year-old stallion by NRHA Six Million Dollar Sire and Hall of Fame inductee Smart Chic Olena and out of Sugarplum Spook. Owned and bred by Rosanne Sternberg, the sorrel stallion stands at Sterling Ranch in Aubrey, Texas and was inducted into the NRHA Hall of Fame in 2015.

Before entering his career in the breeding shed, Smart Spook enjoyed a successful career within the show pen, earning more than $403,149 in NRHA Lifetime Earnings (LTE). The stallion’s top finishes include:

The stallion’s first class of money earning offspring was foaled in 2006. Since then, the sire has produced eight foals with more than $100,000 in NRHA LTE in addition to five NRHA Futurity Champions and one NRHA Derby Champion. Helping the notable sire cross the five million dollar mark were great performances by his offspring at the 2018 NRHA European Futurity, the 2018 One HOT Reining – One HOT Summer Slide, and the 2018 Reining by the Bay, where Luca Fappani rode Spooks N Jewels (out of Whiz Jewels, owned by Andrea and Tish Fappani) to more than $22,500 in earnings.

Smart Spooks’ most notable offspring include: