For Immediate Release – Oklahoma City, Oklahoma – July 27, 2018 – In 2007, the National Reining Horse Association (NRHA) Hall of Fame Committee initiated the NRHA Dale Wilkinson Lifetime Achievement Award, supported by the Reining Horse Foundation (RHF). Each year, the NRHA Board of Directors and past Hall of Fame inductees vote to approve a worthy candidate for recognition. This year’s recipient is William Shatner. 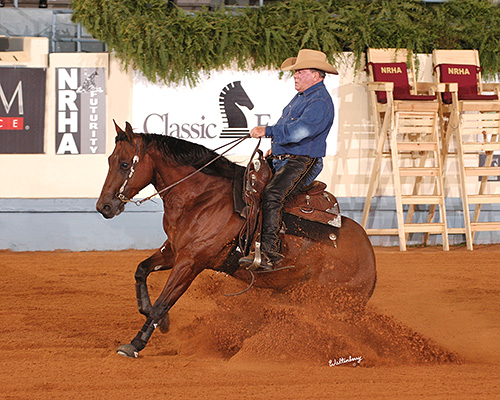 William Shatner cultivated a career spanning over 50 years as an Emmy and Golden Globe-winning actor, director, producer, screenwriter, recording artist, author and horseman. He is one of pop culture’s most recognizable figures, and for his contributions as a horseman, horse industry promoter and philanthropist, NRHA is proud to honor him with the Dale Wilkinson Lifetime Achievement Award.

Shatner’s passions for horses and philanthropy were united through his involvement with AHEAD With Horses, a charity organization that gives physically and mentally challenged children the thrill of riding a horse—and boosts their confidence and self-esteem, often with life-changing results. For more than two decades, he has hosted the Hollywood Charity Horse Show at the Los Angeles Equestrian Center. The event benefits AHEAD With Horses and other Los Angeles-based charities. Additionally, he has been a high-level promoter and fundraiser for the sport of reining, participating in a host of charity events for RHF. When the FEI World Equestrian Games™ came to U.S. soil, he and his wife, Elizabeth, supported the event at a high-level and cheered on reining teams from around the globe. Not only has he raised thousands of dollars for various charities, he has introduced reining to other celebrities, as well. Tim Allen, Willie Nelson, Sarah McLaughlin and Neal McCoy are just a few of the people who have performed at the reception with the Hollywood Charity Horse Show and have been exposed to reining, thanks to Shatner’s devotion to the sport.

Shatner also has been successful as a breeder and exhibitor. A longtime dedicated breeder of American Quarter Horses, he has had smashing success with the beautiful American Saddlebred, developing and riding world champions “Sultan’s Great Day” and “Revival.” He has won numerous world championships in several equine events.

Shatner continues his involvement with film and television while still managing to find time to work with charities and further his passion for the equestrian sports. He and his wife and three adult children live in Los Angeles.

This award is named after the legendary reining horse trainer known as the “father of reining,” Dale Wilkinson, the first inductee into the NRHA Hall of Fame. Wilkinson is a multiple NRHA Futurity champion and one of the founding members of NRHA. In addition, during his lifetime, he was an educator, promoter and mentor to all reiners – professional and non pro – exemplifying how a rider should conduct themselves, train and exhibit a horse. Because of his unmatched lifetime of accomplishment in reining, it is entirely appropriate that the NRHA Lifetime Achievement Award is named for Dale Wilkinson.