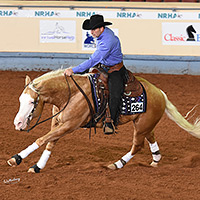 Schmidt and Gunna Cash Ya hold onto the lead
In Monday’s first section of the semifinal, Joe Schmidt of Pilot Point, Texas rode Allison Sutton’s Gunna Cash Ya (Lil Joe Cash x Gunners Blonde Chic) to a 222 [video]. The semifinal effort gave the pair a 438 composite to lead the L3-L1 divisions.

Just one-half point behind in the composite is Smokin Paleface and Brent Naylor of Phoenix, Arizona. On Monday, they slid their way to a 221½ [video] to bring their composite score to 437½ . Owned and nominated by Tim Anderson, the sorrel stallion is by NRHA Million Dollar Sire Pale Face Dunnit and out of Lost In Tinseltown.

NRHA Markel Futurity Sales Graduate Off N Running took to the arena in the second section of the semifinal with Austin Lee Roush of South Bend, Indiana. The duo marked a 216 ½ to move up the leaderboard for owner Matt Roush and nominator Arcese Quarter Horses USA. The sorrel stallion sits third in the L3 and L2 and second in the L1 division with a composite score of 435½.

The qualifying continues tomorrow with the Level 4 Open Semifinal sponsored by Not Ruf At All and Tamarack Ranch. The top 75 horses (plus ties) in the L4 Open division will vie for their chance at the second largest purse in NRHA Futurity history ($1.5 million estimated).

At the completion of tomorrow’s competition, the following number of horses will advance to the Open Futurity Finals to be held on Saturday, December 1: 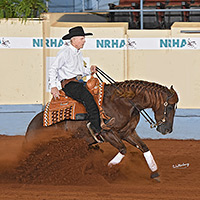 Morgan and Tracy Tinseltown setting the bar
After 202 horse and rider teams took to the arena to qualify for the CINCH Non Pro Futurity Finals, the richest in the event’s history, one pair remained at the top of the leaderboard: NRHA Million Dollar Rider James Morgan, DVM and Tracy Tinseltown [video]. They marked a 219½ in the first section to set the bar. Dr. Morgan purchased Tracy Tinseltown (by Hollywoodstinseltown and out of Smart Scooter Chic) as a 2-year-old. She is nominated by Tracy Higginbottom. The pair also lead the prime time division.

The second-highest score in the go-round and highest in the youth division was posted by Cade McCutcheon and Alpha Brave Hard (Gunners Special Nite x Miss Brim Peppy) owned by Tom and Mandy McCutcheon. Together the duo marked a 219 [video]. Alpha Brave Hard is nominated by Alpha Quarter Horses LLC.

In the L3 division, Samantha Smith and Neverthoughtiwould held onto the top position with a 218 ½ [video]. Neverthoughtiwould, by NRHA Million Dollar Sire Pale Face Dunnit and out of Shine Tini, is nominated by Ginger Schmersal and owned by Lance Griffin.

The leaderboard changed in the L2 and L1 divisions with two entries earning a 217 ½: George Lawrence aboard Time For The Gunshow and Daniele Whitney riding Absolute Gunner. Lawrence Ranch owns Time For The Gunshow (nominated by Kindra Rader), a stallion by NRHA Million Dollar Sire Gunners Special Nite and out of Timed To Shine. Absolute Gunner (nominated by Turnabout Farm, Inc.) is a son of NRHA Hall of Fame Sire Gunner and Taris Modern Design.