Oklahoma City, December 1, 2017 – For veteran NRHA Futurity competitors Mandy McCutcheon and Kelle Smith, it’s still exciting to have your name associated with the high score at the end of Finals night. But it’s even more thrilling to go head-to-head in a run-off to determine the CINCH NRHA Level (L)4 Non Pro Futurity Champion.

After tying with a score of 216.5, the competitors chose to do a run-off to crown the winner. Smith was up first, riding her stallion, Night Time Spook (Spooks Gotta Whiz x Custom Night Time) into the pen. After a slight stumble, the pair’s score improved over their original with a 217.5. 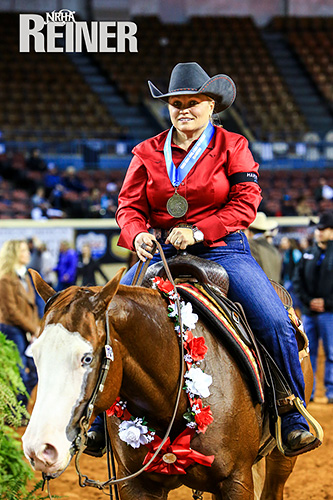 McCutcheon and Best Nite Ever (Gunners Special Nite x Best By Benz), nominated by Lisa Stafford-Johnson, slid to a 219 and the crown of 2017 CINCH NRHA Non Pro Level 4 Futurity Champions.

“I just tried to be smoother the second time,” says McCutcheon, NRHA’s leading money earning Non Pro and Million Dollar Owner. “She does everything real dynamic and powerful; I tried to just be smoother instead of forcing her into things.”

The plan worked, as the mare – a Legacy Sale purchase for Mandy and her husband, NRHA Million Dollar Rider Tom [McCutcheon] – added $42.273.59 to the lifetime earnings of the NRHA Two Million Dollar Rider. The win was McCutcheon’s eighth NRHA Non Pro Futurity championship, and her first since 2013.

Smith’s original finals score of 216.5 was good enough to earn her the Prime Time Non Pro Futurity Championship on top of her reserve L4 Non Pro Championship. The check written for $28,639.62 was a nice bonus, considering she didn’t think her stallion, bred and nominated by Steve Simon, would make it to the big show.

“We didn’t have a lot of time together. I purchased him in June this year, and he was very green,” Smith says.

Another rider who did not have a lot of time to get to know his mount was 17-year-old Cade McCutcheon, winner of the CINCH NRHA Youth Non Pro Futurity Championship aboard One Stormy Nite (Gunners Special Nite x Whatta Royal Vintage), owned by Mandy McCutcheon and Tom McCutcheon. Cade got the last-minute ride from his father, Tom, after the gelding – bred and nominated by Turnabout Farm Inc. – did not make the Open L4 Futurity Silver Spurs Equine Semifinals, also sponsored by Not Ruf At All.

“I rode him as a 2 year old but have only ridden him three times since then before we showed this week,” says Cade. “He’s very easy to get along with.”

Kevin Ball’s first foray into showing a futurity horse proved to be very successful. The mechanical engineer from North Texas showed his mare, This Chic Guns It (Gunner x This Chic Dun It), to win the Level 3, 2, and 1 Non Pro Futurity Championships and a paycheck of $67,102.46.

“She will give you 110 percent of what you ask, and she always has a good attitude and expression,” says Ball. “She’s just gotten better and better as the week went on. I was a little nervous going into the finals, to be honest, and she panicked a little in the left turns, but I got her confidence back as the ride went on.”

The Reserve Championship in the L3 Non Pro Futurity went to Kristen Darnall-Titov and her Gunsup In Tinseltown (Hollywoodstinseltown x Always Gotyer Gunsup), a stallion bred and nominated by McQuay Stables Inc.