For Immediate Release – Oklahoma City, Okla. –  September 22, 2017 –  High school rodeo and the reined cow horse competition are leading to a college scholarship for Zayle Davis of Blackfoot, Idaho, thanks to a partnership benefiting competitors at the National High School Finals Rodeo (NHSFR). For the second consecutive year, the Reining Horse Foundation has joined with the National Reined Cow Horse Association (NRCHA) to provide a $2,500 scholarship to the student athlete marking the highest score in the reining during the NHSFR, held July 17-23 in Gillette, Wyo. 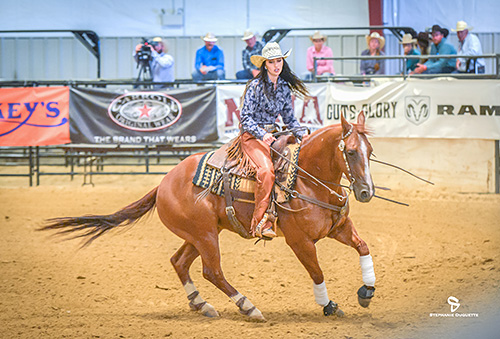 In her final year of high school competition, Davis scored a 151 in the rein work during the short go to capture the award. She also received a Morrison bronze courtesy of the National Reining Horse Association (NRHA). She was riding Reymanator (Dual Rey x Savannah Hickory), a 2006 American Quarter Horse gelding. In a field of 107 reined cow horse contestants, Davis finished fourth overall with a total score of 874.5; the event champion is Daxon Buttars of Snowville, Utah.  Reymanator is owned by Sandy Semanik of Jacksonville, Fla., but is a full-time member of the Davis family.

Davis also had the high reining score in the preliminary round and knew she needed to perform a clean pattern in the finals. Of her winning run, she said, “I’ve been practicing a long time. Once I walked into the pen, I cued him right, and I’ve never had him stop like that before. He was being really good. It takes a lot of teamwork to have a run like that.” 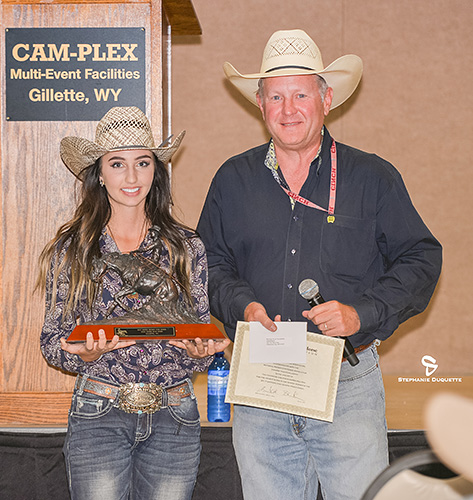 Davis and Reymanator were the 2017 Idaho State High School Rodeo Champions in reined cow horse. A true example of versatility, the gelding is also her mount for barrel racing and pole bending and her brother Dawson’s horse for tie-down roping. He was the 2009 NRCHA Snaffle Bit Futurity Champion, trained and shown by Zayle’s father, Zane Davis.

“Providing youth scholarships is a core program of the Reining Horse Foundation,” said Mandy McCutcheon, a $2 million NRHA rider and Foundation Board member. “It is our hope that by reaching out to the youth contestants of high school rodeo, more students will be introduced to reining and reined cow horse and ensure these sports grow and succeed for generations to come.”

Riding Reymanator, a 2006 gelding, Zayle Davis of Idaho marked the high score in rein work in the reined cow horse competition at the 2017 National High School Finals Rodeo. The win earned Davis a $2,500 scholarship from the Reining Horse Foundation.