For Immediate Release – Oklahoma City, Okla. – June 7, 2017 – The National Reining Horse Association (NRHA) announces it has hired Leslie Baker of Edmond, Okla., to serve as the first executive director of its charitable arm, the Reining Horse Foundation (RHF). In addition, she will work on special NRHA communications projects. 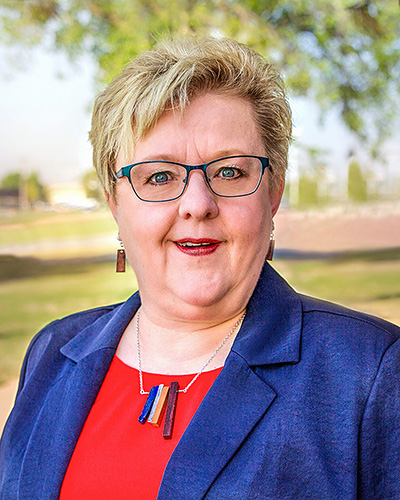 Baker has been serving as a consultant for the Foundation since 2015, producing the Fifty for Fifty fundraising concert and dinner in conjunction with the NRHA Futurity 50th anniversary. In addition, she has helped guide the RHF through strategic planning, governance updates, and rebranding. She has overseen the launch of the Reiners Club, a new annual giving program, and Reining Boot Camps, a major annual fundraising event series that supports the Dale Wilkinson Memorial Crisis Fund.

“Leslie has demonstrated the ability to work closely with our committed volunteers to help the Reining Horse Foundation establish goals and work to achieve them,” said NRHA Commissioner Gary Carpenter. “We have a high regard for the professionalism and leadership she brings to NRHA and the Foundation.”

Baker has a long history of working with nonprofit organizations, including several in the equine and western lifestyle industry. In 2016, she obtained her Certification in Nonprofit Management from the Oklahoma Center for Nonprofits. She is a graduate of Iowa State University.

The mission of the Reining Horse Foundation is caring for the reining community and honoring the sport’s legacy. Core programs include the Crisis Fund benefiting reiners enduring medical hardships, accidents and disasters; youth scholarships; and the NRHA Hall of Fame.

The contest will return with a few changes from its layout in previous years, with the biggest changes being the creation of a junior and senior division and the opportunity for each college to bring up to two teams per division. Contestants will complete a penalty clip test, rulebook test, and judge two sets of ten live runs during the NRHA Open Level 4 Semi-Finals at the Futurity. 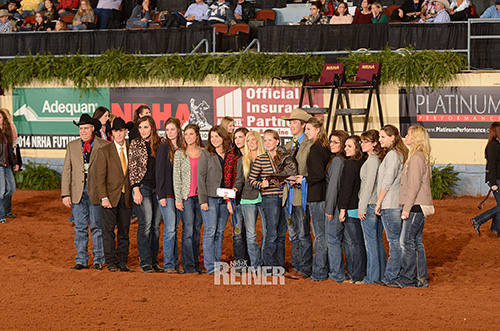 “This contest allows us to support an important sector of the equine industry. These contestants are about to enter a new phase of their life in the work force, and any opportunity we have to expose them to high level reining, judging, and scribing, the more likely we are to have them continue to be involved with NRHA and the sport of reining,” said Hayley Eberle, Manager of Marketing & Communications at NRHA.

During the contest, the senior division will scribe for the junior division and vice versa, with scribe pairs being predetermined prior to the start of the competition. An awards breakfast will be held the following morning to announce placings and celebrate the winners.

For more information, please contact Hayley Eberle at heberle@nrha.com or (405) 946-7400. Entry forms can be found at NRHAFuturity.com.

Columbus, Ohio – June 2, 2017 – Nearly 200 of the nation’s leading middle school and high school equestrians will converge in Oklahoma in July to compete for top prizes in the 2017 Interscholastic Equestrian Association (IEA) Western National Finals.  The 2017 Western National Finals will once again be held at the Oklahoma State Fair Park in Oklahoma City on July 1 and 2. Sponsored by the National Reining Horse Association (NRHA), the competition will run in conjunction with the NRHADerby. IEA Western riders will display their talents in Reining and Horsemanship, as individuals and teams during the two-day event.

“This is really a special event for our IEA riders because these youngsters get to compete in the same venue at the same time that the world’s best professional and non-pro western riders ride for big prizes and world-wide recognition. The excitement of the competitions transcends multiple generations and isn’t that great for equestrian sport,” said Myron Leff, IEA Co-founder and Chief Operating Officer.

Because only a fraction of the IEA’s 13,500 riders qualify for the National Finals, it is important to provide the Western Finals in real-time with live-streaming and archive viewing to the other riders, families, friends and supporters from across the world. NRHA and Equine Promotions will provide the technical capabilities so IEA’s diverse audience can enjoy the Finals competition.

Celebrating its 15th anniversary, the IEA has more than 13,500 middle and high school student-riders across the United States.  The IEA was organized to promote and improve the quality of equestrian competition and instruction available to middle and secondary school students and is open to public and private schools and barn teams. Its purpose is to set minimum standards for competition, provide information concerning the creation and development of school associated equestrian sport programs, to generally promote the common interests of safe riding instruction and competition and education on matters related to equestrian competition at the middle and secondary school levels. No rider needs to own a horse because the IEA provides a mount and tack for each equestrian at every event. For more information, please view the IEA website at: www.rideiea.org.

“Through this partnership, we will be able to increase the exposure of NRHA and share the wonderful stories of our horses and riders,” says Sammi Miller, Director of Corporate Relations. “Our (NRHA and WWS/VHH) common goal is to promote and grow the sport of reining by focusing on the sport’s achievements, inside and outside of the arena.”

Tom McCutcheon said, “It’s exciting to partner with the NRHA, especially at this level. We are looking forward to working together.”

VHH/WWS managing partner Cheryl Magoteaux Cody added, “We provide a cohesive news and learning resource for the reining industry and our goal is to work with the association to bring more information to reining participants and fans worldwide.” She added, “A priority is to showcase the entire array of riders and performance – from Green to Level 4 Open!”

Focusing on all levels of competition is a formula that was tested and found to be sound at the recent National Reining Breeders Classic. At that event, the VHH Video team shot and posted over 70 videos which included interviews with the winners or not only the high profile event but also of every ancillary class. The result was over 450,000 views of the videos plus well over 7 million total impressions.

Cody summarized, “I have always believed that everyone has a story. We love giving reiners an opportunity to share their stories and from the response we are getting, people love hearing and reading about them.”

More about WWS and VHH

Tom McCutcheon’s VHH was established in 2010 and provides online access to reining industry event coverage with highlights, results, and interviews plus tips from and insights with some of the top professionals in the NRHA. In just seven years, VHH has become one of the most focal media outlets covering reining and the NRHA worldwide.

In early 2017, WWS and VHH merged to increase their effectiveness in keeping fans up-to-date on the latest happenings in the reining horse industry through emails, social media, online learning, news videos, and much more. The combined entity is now headquartered at the Pro Management offices in Byars, Oklahoma.

More about NRHA
Founded in 1966, the National Reining Horse Association has promoted and encourage the development and enjoyment of the sport of Reining for more than 50 years. During the celebration of the 50th anniversary NRHA Futurity in 2016, NRHA leveraged its media, digital and social properties for more than 2.4 million total impressions, more than 535,000 views of daily top runs and daily diaries, and more than 500,000 viewers of three NRHA Futurity episodes produced by NRHA Inside Reining and aired on RFD-TV. Real-time online scoring and standings, plus video and photo galleries featuring winners of Futurity and Adequan North American Affiliate Championship classes helped showcase the horses and riders that make reining an exhilarating sport.

On a daily basis, NRHA takes pride in offering revolutionary programs and top-notch events for more than 15,000 members in 40 countries while providing the framework for a fun-filled, family-oriented atmosphere. More information on its shows and programs, like the upcoming NRHA Derby, can be found at www.nrha.com.

PLYMOUTH, MA – May 30, 2017 – SmartPak is once again revolutionizing customer service and making life in the barn easier than ever – the company is excited to announce that they are now offering texting for all customers! Have a supplement question? Ask SmartPak’s Supplement TEXTperts! Need to order more fly spray? SmartPak’s just a text away!

“Since the beginning, we’ve prided ourselves in providing knock-your-socks-off  customer services for both riders and their horses,” said Sarah Mann, Vice President of Brand and Customer Experience at SmartPak. “As a company of riders, we know you want to spend your free time in the saddle, not on the computer. That’s why we’re thrilled to once again be offering our exceptional customer service in an even more convenient method of communication. Now our smarts are not just at your service, they’re in your pocket!”

SmartPak has always been known for providing world-class customer service. In addition to always exclusively hiring riders and horse owners who truly understand the joys and struggles of life in the barn, SmartPak is committed to providing a team of true Supplement Experts and Product Specialists.

“Every month, the Customer Care team undergoes hours of continuing education in horse health, nutrition, and supplements, as well as seasonal training on the latest tack, equipment, and supplies,” added Mann. “When you speak with one of our team members, you can rest assured that they are going to work with you to find the best solutions for you, your horse, and your budget.”

Now that valuable expertise is just a text away. Need more treats or want to snooze your next shipment? Help is literally in the palm of your hand. Customers can use SmartPak’s text line to ask questions, manage their account, and place orders from any mobile phone.

Since 1999, SmartPak has focused on exceptional customer service by expanding their hours, committing to one-day email response times, and adding on-site live chat, and they’re now the first equine company to offer text support for questions, orders, and account management.

To learn more about all of the great ways to communicate with SmartPak, visit www.SmartPak.com to learn more.

From the feed room to the tack room, SmartPak offers innovative solutions to help riders take great care of their horses. SmartPak was founded in 1999 with the introduction of the patented SmartPak supplement feeding system. The revolutionary, daily dose SmartPaks are custom-made for your horse, individually labeled and sealed for freshness. With the success of this simple and convenient feeding system, SmartPak has continued to expand its offering of quality products, including its own line of more than 55 supplement formulas called SmartSupplements, and a wide variety of tack, equipment, and supplies. The company has grown rapidly each year and is now the largest retailer of equestrian products in the United States. SmartPak’s success has been powered by a passion for delivering an unbeatable customer experience, and the company has been recognized with a Bizrate Circle of Excellence award seven years in a row, as well as receiving an “Elite” rating from STELLAService. A nine-time Inc. 500/5000 honoree, SmartPak is the only equine company ever named to the Inc. 500 list.