For Immediate Release – November 14, 2017 – Oklahoma City – After a successful first run in 2016, the National Reining Horse Association (NRHA) is pleased to announce the lineup for the $20,000 Invitational Freestyle Reining during the 2017 NRHA Futurity & Adequan® North American Affiliate Championship Show. 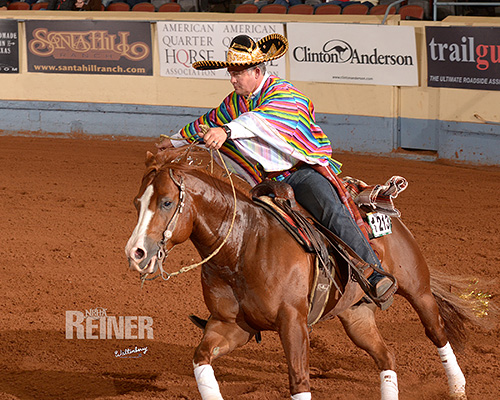 Presented by the Oklahoma City Convention & Visitors Bureau, the Freestyle competition will take place on November 30 at 6 p.m. in the Jim Norick Arena and is a fun, kid-friendly event for the entire family! The competition features riders that have choreographed one-of-a-kind reining routines featuring elaborate music and costuming. The 12 riders selected to compete are:

“NRHA is thrilled to have the Invitational Freestyle Reining at the Futurity again this year. With the help of the Oklahoma City Convention & Visitors Bureau, we have established a fantastic lineup for this year’s competition. Everyone is invited to come out on Thursday night and enjoy this exciting event at the Futurity.”

Whether you’re a reining pro or simply someone looking for fun on Thursday night, this event is sure to be fun for all! Buy your tickets now at nrhafuturity.com or by calling the Oklahoma State Fair Box Office at (405) 948-6800.