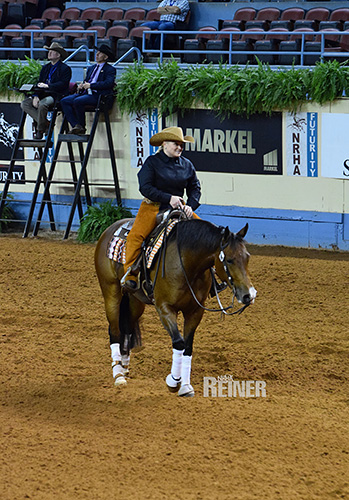 Currently leading the Level (L)4 Non Pro division with a 217.5 score is NRHA Two Million Dollar Rider and Hall of Fame Inductee Mandy McCutcheon riding Gunner Be Custom (Gunner x Custom Made Dunit). “She was good for me,” said McCutcheon about the mare bred, owned, and nominated by McQuay Stables Inc. “I made a couple of mistakes, which I will try to fix for the finals. She is a really nice mare and easy to show. I’m also very happy about how both my kids did; my son Cade [McCutcheon] finished a point behind me – of course his comment was that I was overmarked,” added McCutcheon, laughing. “Carlee [McCutcheon], my daughter, showed another horse of ours [A Special Sidekick] and tied for second place in the level 1 and placed well in the levels 1 through 3. Having her show him was a last-minute decision, and a special thank you goes to NRHA Professional Debbie Brown, who is on our team, for the work she does with our horses.”

Debbie Hubbert and Allthewrightstuff (Hollywoodstinseltown x Shes Cowismatic) also earned a 216.5 to tie for the second highest score in the L4. Bred and owned by Hubbert, the gelding also holds the high score in the Level 3 and 2 Non Pro divisions.

NRHA Hall of Fame Inductee Dr. James Morgan and his own Reiningwiththestars (Spooks Gotta Whiz x Wimpys Memorabilia) were the final pair tied for second in the L4. Morgan is also the breeder and nominator of the stallion.

A half point behind, Gunnin For The Gold (Pale Face Dunnit x Gorgeous Like A Star), owned and ridden by Terri-June Granger, earned the second highest score of the Levels 3 and 2. Granger also leads the Level 1 with a score of 216. Her gelding was bred by Greg Hill and nominated by Ginger Schmersal.

The second and third section of the CINCH Non Pro Futurity go round will be held on Monday, November 27, and on Tuesday, November 28, respectively. The following will make their way to the clean slate finals:

The top 5 horses (plus ties), following those who qualified for the finals in all four levels, have a chance to earn a ticket to the finals by taking part in the Consolation which will be held on Wednesday, November 29. Riders in the Youth and Prime Time divisions are not eligible for the Consolation, and the champions will be determined in the clean slate finals.

Reining action will continue on Monday, November 27, with the first section of the NRHA Open Futurity Level 1, 2 and 3 Semifinals, followed by the second section of the CINCH NRHA Non Pro Futurity go round.