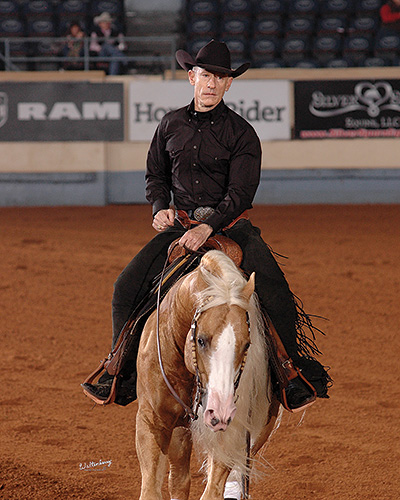 For Immediate Release – October 12, 2017 – Oklahoma City, Okla. – In 2007, the National Reining Horse Association (NRHA) Hall of Fame Committee initiated the NRHA Dale Wilkinson Lifetime Achievement Award, supported by the Reining Horse Foundation. This award is named after legendary reining horse trainer known as the “father of reining,” Dale Wilkinson, the first inductee into the NRHA Hall of Fame. Wilkinson is a multiple NRHA Futurity champion and one of the founding members of the National Reining Horse Association. In addition, during his lifetime, he was an educator, promoter and mentor to all reiners – professional and non pro – of how a rider should conduct themselves, train and exhibit a horse. Because of his unmatched lifetime of accomplishment in reining, it is entirely appropriate that the NRHA Lifetime Achievement Award be named for Dale Wilkinson.

The 2018 recipient of the NRHA Dale Wilkinson Lifetime Achievement Award is Lyle Lovett of Spring, Texas. The renowned singer, songwriter, actor and entertainer is an active NRHA competitor who has raised thousands of dollars for the RHF and has donated his services to promote the National Reining Horse Association and the sport of reining at NRHA and National Reining Breeders Classic events. He has also taken part and recruited other celebrities for the RHF Celebrity Slide held in the past during the NRHA Futurity. Lovett has an award named in his honor for his service and time dedicated to the NRHA and RHF: the Lyle Lovett Distinguished Service Award.

Lovett has earned four Grammy Awards including Best Country Album and Best Male Country Vocal Performance. He recorded his own brand of music, a unique mix of blues, R&B, jazz, gospel and country, since 1980 with more than a dozen albums to date. His highest entry, the number 10 chart hit on the U.S. Billboard Hot Country song chart, “Cowboy Man.” But Lovett’s talents don’t end there. This accomplished entertainer is also a well-respected songwriter and has a lengthy list of acting credits. He now joins the ranks of those who have significantly impacted the sport of reining.
NRHA will proudly honor the 2018 inductee and award recipient during the NRHA Convention & Awards, a gathering known as the NRHA Winter Meeting in 2016 and 2017.
###