Oklahoma City, November 30, 2017 – The grandstands stayed filled with supportive friends, families, and coaches throughout the day on Thursday, November 30, to see which competitor’s dream of becoming the Adequan® North American Affiliate Championship (NAAC) Silver Spurs Equine Rookie of the Year would come true. At the end of the day, the Adequan® Arena saw yet another run off. This time between Canadian Magalie Boulanger, representing Association Quebecoise de Reining Inc., and Kennedy Bryant, representing the Southwest Reining Horse Association.

Both competitors scored a 216.5 in their first run, but it was Bryant who took the Adequan® NAAC Silver Spurs Equine Rookie of the Year title in a field of 65 competitors, after earning a 220.5 in the run off. Bryant rode her own All Nite Spook (Smart Spook x Dun It Fri Dee Nite), an 8-year-old gelding, to the highest score since they have been together.

“Becoming the [Silver Spurs Equine] Rookie of the Year feels amazing,” Bryant said. “This goal was something that my trainer [NRHA Professional] Bud Lyon suggested, and ever since then, we have worked towards that goal. He wants to be a good horse and listen most of the time. Sometimes he doesn’t, but it makes these moments mean even more.” Lyon speaks highly of his intelligent and determined 16-year-old student who qualified for the finals in OKC at the South Central Affiliate Regional Championship (ARC). “Her memory retention is her best asset,” he said. “I can tell her something one time, and she files that concept away and immediately knows how to implement it. Her ability to process information and put it into action is incredible.” Bryant also won the Adequan® NAAC Rookie Level 2 out of 63 competitors, the $200-added NRHA Rookie Level 2, and NRHA Rookie Level 1. “This moment was possible because of my parents, family, friends, and trainers,” said Bryant. “They all helped me get here, and I could not have done it without them.” 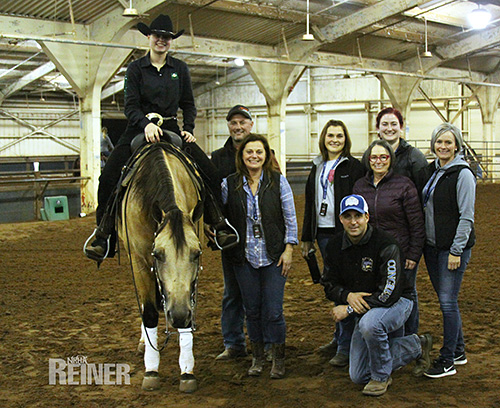 Boulanger and FS Hollywoodwrangler (Starlights Wrangler x MJ Malibu Barbie) took reserve honors in the Adequan® NAAC Silver Spurs Equine Rookie of the Year, NAAC Rookie Level 2, and NRHA Rookie Level 1 after the run off. “I am very happy,” said Boulanger, representing the Eastern Canada (ARC). “We have been together three years, and it has been fantastic the entire time. We get along so well, and I just love him.” The 9-year-old gelding is owned by Boulanger and was bred by Bill and Patty Fingland. “I want to thank my coach, [NRHA Professional] Manon Moisan, who is back in Canada, and my family and friends for being here today,” she said.

Taking reserve honors in the $200-added NRHA Rookie Level 2 were Madison Gustin and her own Guns R Spooky (Smart Spook x Berry Yer Guns) with a 215.5. The 7-year-old gelding was bred by WT Waggoner Estate.