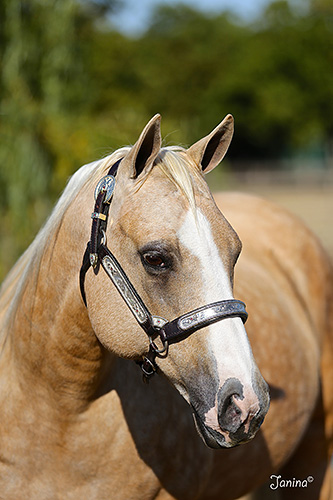 For Immediate Release – August 1, 2018 – Oklahoma City, Oklahoma – Since its inception in 1966, the National Reining Horse Association (NRHA) has seen thirty-eight stallions cross the coveted NRHA Million Dollar Sire mark. After the completion of several NRHA events this weekend, however, history was made when the offspring of 2016 NRHA Hall of Fame inductee Ebony Shines earned her enough to unofficially become the first NRHA Million Dollar Dam.

Ebony Shines spent approximately one year in the show pen between 2004 and 2005. With NRHA Professional Jerry Fowler aboard, the mare earned more than $25,000 while exhibiting at shows such as the National Reining Breeders Classic (NRBC) and the South Country Derby. The pair’s most significant money earnings came during the 2004 NRHA Derby with a level (L)2 open championship, an L3 reserve championship, and an L4 top ten finish.

In 2004, Ebony Shines also began her career within the breeding shed where she found her true success. To date, the dam has produced 16 foals with NRHA earnings, including four with more than $100,000 in NRHA Lifetime Earnings (LTE). These foals have earned top finishes at the NRHA Futurity and Derby as well as the NRBC.

When we asked Rosanne Sternberg about Ebony Shines and this historical achievement she had this to say, “I have owned ‘Ebony’ for 10 years and purchased her from Howard Mann (Manntana, LLC) when I bought her second foal, Shiners Chic, who was a 3-year-old at that time. I bought her because she seemed perfect to cross on my stallion, Smart Spook, and was out of Ebony Whiz, a good daughter of the legendary Ebony Chex. Apart from a couple of her foals, I have owned or raised all her offspring and have watched her produce great performance horses, one after the other. Her foals have gone to South America and Europe and several have become legends in reining, including Shiners Chic, the second highest money earning Smart Chic Olena offspring at $295,247, still showing after 10 years of competition; NRHA Open Futurity Co-Champion Shine N Spook; and several other remarkable show horses. The beautiful palomino has brought me much joy as a broodmare and many people happiness and success as a performance horse producer. I look forward to her offspring continuing to win and maybe reaching the second million with her!”

Before last weekend, Ebony was less than $2,000 shy of crossing the million dollar mark. Warwick Schiller and his Shine Spook Shine (by Smart Spook) earned more than $1,200 at Reining by the Bay to add to the mare’s offspring earnings. At One HOT Reining – One HOT Summer Slide, two horse and rider combinations added nearly $1,000 to Ebony’s total – Shauna Larcombe with Sternberg’s Smart Spook Shines (by Smart Spook) and Sean Pulley with his Spooks Shiner (by Smart Spook). In addition, Ebony’s Hang Ten And Shine (by Hang Ten Surprize) had a great performance in the NRHA European Open Derby finals with Rieky Young at the reins, helping push the elite mare over the NRHA Million Dollar Dam mark.

Her most notable offspring include: