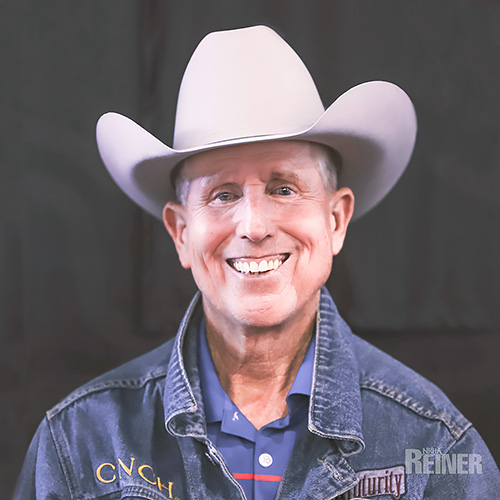 For Immediate Release – April 25, 2018 – Oklahoma City, Oklahoma – With a rich tradition of athletic horses, talented riders and successful owners, the National Reining Horse Association (NRHA) celebrates each opportunity to highlight the hard work and accomplishments of its members. After a successful trip to the National Reining Breeders Classic (NRBC) in Katy, Texas, Dr. James Morgan, DVM crossed a monumental milestone and is unofficially an NRHA Million Dollar Rider.

Dr. Morgan earned his first official paycheck at the 1974 NRHA Futurity for an amount of $114.60. Since then, he has ridden on to win the NRHA Level (L)4 Non Pro Futurity in 1984-86 and has eight reserve championships within the same division. He furthered his NRHA Lifetime Earnings (LTE) through finals appearances at many other shows such as the All American Quarter Horse Congress, NRHA Derby and NRBC. Adding to this impressive resume, Dr. Morgan is an NRHA Lifetime Member, Hall of Fame Member, past-member of the NRHA Board of Directors and an NRHA Judge. He has participated in every industry event imaginable, all while continuing his work as a veterinarian.

During NRBC, Dr. Morgan rode and qualified two horses to the Non Pro Classic Finals that helped him cross this historic milestone. Shiney Workboots (Smart And Shiney x Reminic At Work) earned a third place finish in the Prime Time division and tied for fourth in the L4 with a score of 219. Atop Reiningwiththestars (Spooks Gotta Whiz x Wimpys Memorabilia), Dr. Morgan placed in the top 20 in the Prime Time and top 30 in the L4.

At the age of 72, Dr. Morgan is the oldest person to ever reach the NRHA Million Dollar Rider mark and is only the third non pro rider to reach this milestone. “All this time, I’ve been planning on this run here,” said Dr. Morgan when describing how it felt to achieve this long-awaited goal. The years of planning and preparation came down to one run, and it worked out perfectly—earning the pair enough money to deem Dr. Morgan an NRHA Million Dollar Rider.