For Immediate Release – Oklahoma City, Okla. – July  2, 2017 – The 2017 National Reining Horse Association (NRHA) Derby hosted the Collegiate Reining Championship on June 30. However the title of champion didn’t come easy, as it took a runoff to decide the winner for this year. 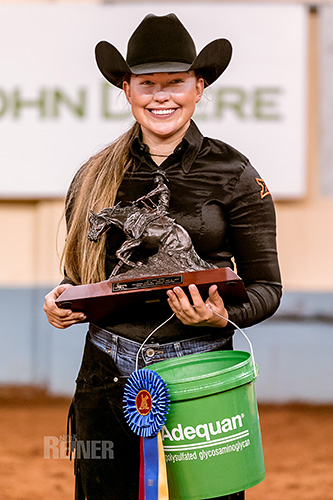 Hannah Mitchell won the championship with a score of 222.5 with The Boominator donated to the competition by James Hotz.

Mitchell took the victory after a run off with Julia Spreng, who ended up Reserve Champion scoring 220.5 with HR Dun By Whiz owned by Randy and Sharon Reecer. Both competitors tied after their first runs scoring 217.5.

Mitchell is a freshman at Oklahoma State University and is a native of Cuba, Missouri. Spreng is a sophomore at University of Georgia majoring in Business. A native of Port Orange, Florida qualified to compete at the Collegiate Reining Championship through NRHA.

The Collegiate Reining Championship consists of 12 riders – four from the National Collegiate Equestrian Association (NCEA), four from the Intercollegiate Horse Show Association (IHSA), and four that are selected by the NRHA. This year, the riders selected from the pool of collegiate NRHA members were: Holly Lansidel (Southern Methodist University), Jaci Marley (Texas A&M), Julia Spreng (University of Georgia), and Kyndal Harper (University of Georgia). 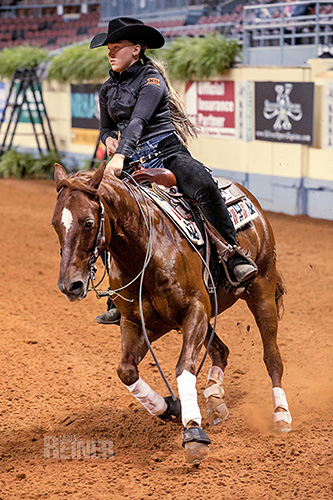 NRHA and the National Reining Horse Youth Association (NRHyA) would like to thank the following horse owners who donated their horses for the NRHA Collegiate Reining Championship: