Brian Bell and Makeit In Hollywood lead the first go, section 1 of the NRHA Open Futurity 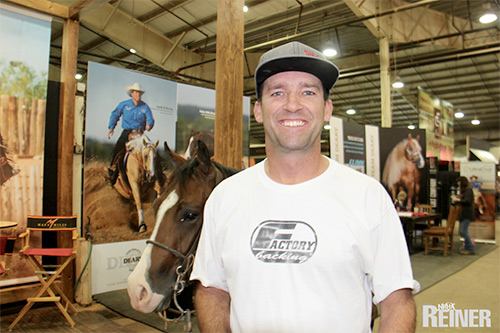 The Coliseum welcomed the first go, section 1 of the NRHA Open Futurity which counts 370 entries. Earning the highest score on the first day of competition and leading the Level (L)4 division was Brian Bell riding Makeit In Hollywood. The NRHA Million Dollar Rider posted a 221.5 riding Julie Ridgeway’s gelding by NRHA Million Dollar Sire Hollywoodstinseltown and out of SR Mischief Maker, a NRHA/Markel Sale Grad. “I’ve shown him several times this year, and he’s won a paycheck every time, but he just didn’t go the way I would have wanted him to,” said Bell. “Today I was really happy with him, and he was really easy, too.”

Leading the L3 Open division with a 219.5 was Casey Hinton aboard Mega Mag, a stallion by Magnum Chic Dream and out of Big Gold Chex owned by Kathy Hinton and Casey Hinton. In the L2 Open division, Brent Naylor rode Trashy Spookshow (Gunnatrashya x Spook Off Sparks) to the top score, a 218. Leading the L1 division with a 216.6 was Vanessa Strottman riding Stefano Calcagnini’s Cashing In Diamonds (Lil Joe Cash x Diamond Steppin Whiz), a 2016 NRHA/Markel Prospect Sale consignment.

The reining family celebrated Thanksgiving at the Thanksgiving buffet hosted by the Reining Horse Foundation. 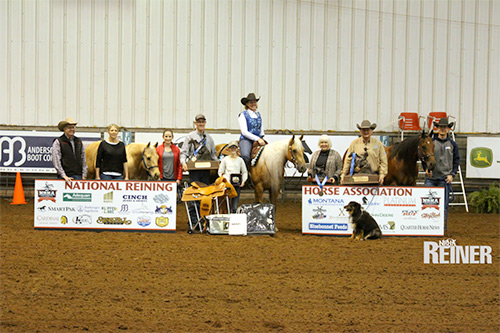 Horse and rider combinations from across the country filled the Oklahoma State Fair Park on Thanksgiving Day to kick off the NRHA 2017 Futurity, some of these competitors with hopes of earning the Adequan® North American Affiliate Championships. Arriving here to compete was no easy feat as competitors must have placed within the top 10 at an Affiliate Regional Championship (ARC) to earn their spot in OKC.

Shauna Larcombe and Designed With Shine (Smart And Shiney x Taris Designer Genes) earned the Adequan® NAAC Open and Intermediate Open Championships with a score of 222.5. The 6-year-old mare was bred by NRHA Million Dollar Owner Rancho Oso Rio LLC, and is owned by NRHA Million Dollar Owner and Hall of Fame Inductee Rosanne Sternberg. “This mare is just awesome; she is getting better and better,” said the NRHA Professional. “It was almost perfect; until the last horse, we were first, second, and third. Now she is getting a deserved holiday.” The wins were even more special, as each of the horses she competed on is owned by Sternberg.

“Rosanne [Sternberg] has been fantastic,” she said. “I have been in the United States just over a year, and she asked me to come to her place and ride some horses; it has been awesome. The opportunities, shows, and horses she has given me are just fantastic. Today has been the icing on the cake, and I can’t wait for next year.” The duo qualified at the South Central ARC representing the Southwest Reining Horse Association (RHA).

Matthew Noel Palmer and Gunner Be A Maverick (Gunner x Dun It Preciously) earned a 221.5 to win the Adequan® NAAC Open Reserve Championship and the USA Reining championship, representing the Eastern Pennsylvania RHA, after their success at the Northeast ARC. The gelding, bred by Nathalie McEntire, had less than $400 in NRHA LTE as a 7-year-old when Palmer found him for his client, Mark Hurd. “He has been a steady eddy; it has been unreal,” said the NRHA Professional. “He has won five or six times out of the eight I have showed him. His previous owners must not have showed him a lot. It is a unique situation, but every time I have shown him, he has been there for me. He has stepped up to the highest level with success, which is fun and gratifying. It was my third year showing in this for the same owner, and we won the other two years, so today is a little bittersweet but very special.” ‘Maverick’ will now be ridden by Hurd, who has never shown before, in Green Reiner classes.

Emily Emerson and Wind Er Up Wimp (Wimpys Little Step x Wind Her Up Doc) earned the Adequan® NAAC Intermediate Open Reserve Championship for owner Susan Geiger with a score of 220.5. “He warmed up so good,” said the NRHA Professional. “He was good-minded, everything was easy, and I knew I couldn’t warm him up too much or I wouldn’t have enough horse. He is honest, and I know what it takes to get him ready to go. It was fun to win at the Mountain ARC [representing Rocky Mountain RHA] and then come here and win second.”

The 8-year-old stallion, bred by NRHA Million Dollar Owner and Hall of Fame Inductee Vaughn Zimmerman, will get time off before preparing for the FEI World Equestrian Games™ Tryon 2018. “I know I have the horse; that is the nicest thing,” she said. “He is good enough. It is just a matter of getting the run put together when we need it; today is a confidence boost.”