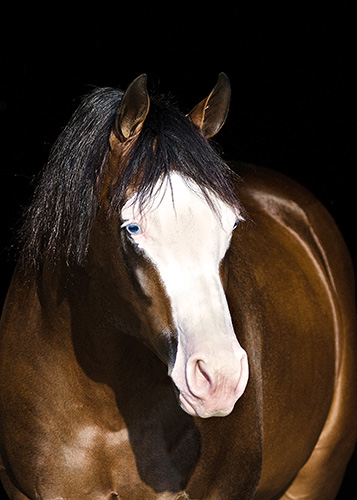 For Immediate Release – May 3, 2018 – Oklahoma City, Oklahoma – Many successful riders, owners and horses in the reining industry spend a lifetime chasing an illustrious National Reining Horse Association (NRHA) Million Dollar title. For Spooks Gotta Whiz, however, it took only seven years in the breeding shed to reach the million. After a spectacular run at the National Reining Breeders Classic (NRBC) by many of his offspring, Spooks Gotta Whiz is unofficially an NRHA Million Dollar Sire.

Spooks Gotta Whiz is by NRHA Million Dollar Sire Spooks Gotta Gun and out of Prettywhizprettydoes. Bred by Clint Haverty, the 2007 stallion is owned by Michell Anne Kimball, who purchased the horse from Duane Hicks in 2009 after meeting him at the High Roller Reining Classic. “Baby” currently stands at Cinder Lakes Ranch in Valley View, Texas.

The bay stallion may have crossed the NRHA Million due to his success in the breeding pen, but Spooks Gotta Whiz had his fair share of glory within his competitive career, accumulating NRHA Lifetime Earnings (LTE) in excess of $345,147. His prominent wins include: