Lyon, November 1 – Equita Lyon is host to the seventh edition of the National Reining Horse Association (NRHA) European Derby. Open to 4, 5, 6 and 7-year-old horses enrolled in the NRHA European Nomination Program, the Open and Non Pro Derby is run in a qualifier and clean slate finals. 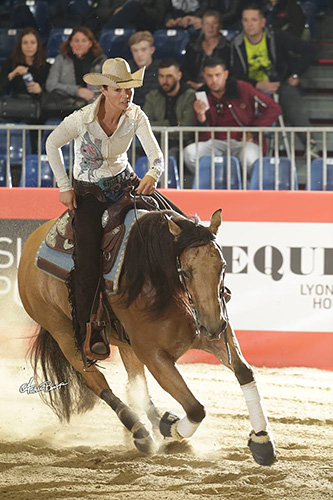 As the Salon du Cheval de Lyon opened the doors to the public, the reining arena in Hall 6 opened the gate to 75 professional riders taking part in the € 93,647.90-added European Derby Open qualifier. Vying for a spot in the finals, and show casing reining at its best, NRHA professionals representing nine European nations left their mark in the show pen. Multiple past NRHA Open World Champion Ann Fonck led the rankings riding Chuck Klipfel and Sabine Lisec’s Made In Walla to a 221.5, the top score of the qualifying go round. By Walla Walla Whiz and out of Hollywood Made (by NRHA Six Million Dollar Sire Hollywood Dun It), Made In Walla boasts close to $70,000 LTE and is a past NRHA European Futurity Open Champion. “He is simply a fantastic horse and I love him to death,” said Fonck about the 6-year-old gelding.

The Belgian professional also posted the second-highest score of the day – a 221 – riding Golden Paint Ranch’s Spook N Perla (Smart Spook x Shine On Ruff). The pair had already left their mark in Lyon in 2015 when they took the NRHA France 3 & 4-year-old Futurity Open Championship.

Once the last competitor left the arena, 38 open riders had secured a spot in the NRHA European Open Derby finals which will be held on Saturday 4.

The NRHA European Non Pro Derby qualifier will be held Thursday 2. The finals will be held on Sunday, November 5.