The memorial service for Joe Hayes will be held at Cooke County Cowboy Church, 8207 Hwy 82, Gainesville, TX on Monday July 2nd at 4 pm. In lieu of flowers the family request contributions to the Reining Horse Foundation youth fund.

For Immediate Release – June 25, 2018 – Oklahoma City, Oklahoma –The Jim Norick Arena was filled with excitement today as competition for the 2018 National Reining Horse Association (NRHA) Non Pro Derby began. With 118 horse and rider combinations on the day’s draw, the crowd watched as each rider left it all on the dirt – fighting for their chance to compete in the non pro finals later this week.

Finishing with a 218 ½ and the top score of the day was Cade McCutcheon and his mount, Dual Reality, a 2013 gelding by Mister Nicadual and out of Snip O Chex. Bred and nominated by Cinder Lakes Ranch and owned by Tom and Mandy McCutcheon, Dual Reality and McCutcheon held their lead in the Level (L)4 and Youth divisions throughout the day after a successful run in the first half of the draw.

Sandy Bentien bred, nominated and rode her own Gotta Twist It Up (NRHA Million Dollar Sire Spooks Gotta Whiz x Make It With A Twist), landing in a tie for the second highest score of the day with a 217 ½. The score was also enough to earn Bentien the top spot in the L3. The pair has had much success in Oklahoma City winning the L2 and L3 non pro divisions at the 2016 NRHA Futurity and a reserve co-championship in the L4 non pro at the 2017 NRHA Derby.

Matching Bentien’s score and sharing second in the L4 was NRHA Million Dollar Rider Jose Vasquez aboard Like Shiner (NRHA Three Million Dollar Sire and Hall of Fame inductee Smart Like Juice x Wind Her Up Shiner), a 2012 mare bred and nominated by Smart Like Juice Inc. – the talented horse’s owner. The team has racked up more than $76,000 in NRHA Lifetime Earnings (LTE) including a recent win at the 2018 National Reining Breeders Classic L4 Non Pro.

Ronny Lane Colston and Baileys Not Painted claimed the top spot in both L2 and 1 divisions with 216. By NRHA Million Dollar Sire Gunners Special Nite and out of Darlins Not Painted, the sorrel gelding with more than $48,000 NRHA LTE is owned by Kevin Colston and was bred and nominated by Turnabout Farm Inc.

The first go of the 2018 NRHA Non Pro Derby will continue with second section tomorrow, June 26 at 8 a.m. at Oklahoma State Fair Park.

During the NRHA Derby, the world’s best 4-, 5-, and 6-year-old reining horses and competitors come to Oklahoma City to compete for an estimated total purse and cash prizes of more than $1 million. For more information on schedules, live video coverage, hotel accommodations, sponsors and more visit nrhaderby.com.

For Immediate Release – June 25, 2018 – Oklahoma City, Oklahoma – To kick off the competition at the 2018 National Reining Horse Association (NRHA) Derby in the Adequan® Championship Arena, the first set of ancillary classes for non pro, open and rookie riders occurred over the course of two days: June 23 and 24.

Clinching the last victory of the day was Morris Kulmer in the $500-added Prime Time Non Pro. Kulmer, who is from Bountiful, Utah, rode his own NVR What A Lucky Joe (Lil Joe Cash X What A Lucky Hit), with a score of 143.

In the second day, open and rookie classes took over the Adequan® Championship Arena. Taking home two titles was Luis Eduardo Maranho Giannasi of Aubrey, Texas riding Ruf Till The End. Owned by Cardinal Hill Training Center LLC, Ruf Till The End is by NRHA Three Million Dollar Sire Lil Ruf Peppy and out of Remedys Sure Slide. The two slid into first place for the $500-added Limited Open and $500-added Rookie Professional, scoring 140 ½ in both classes.

The next class winner of the day was NRHA Million Dollar Rider Cody Sapergia. Sapergia won the $1,000-added Intermediate Open with a 141 ½ on Berried Treasure, a mare by NRHA Ten Million Dollar Sire Wimpys Little Step and out of Custom Red Berry and is owned by George and Carol Bell.

During the NRHA Derby, the world’s best 4-, 5-, and 6-year-old reining horses and competitors come to Oklahoma City to compete for an estimated total purse and cash prizes of more than $1 million. For more information on schedules, live video coverage, hotel accommodations, sponsors and more visit nrhaderby.com 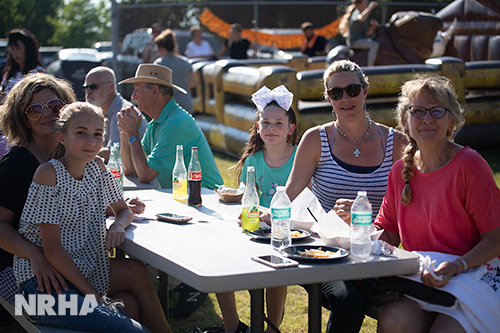 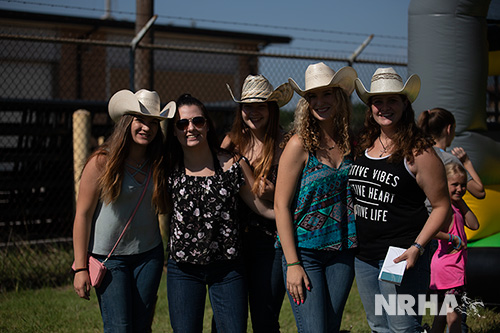 To kick off the night, NRHA held a Judging Fundamentals meeting. During the meeting, NRHA Professional, Judge and Youth Committee Chair, Brett Walters, discussed exactly how maneuvers during a reining run would be scored by judges. Walters utilized the new NRHA Maneuver Standards dvd to walk students through a live look from a judge’s chair. During the seminar, he also discussed what judges want to see in order to award points. Additionally, Walters gave the contestants advice on how improve their reining skills and be better horseman. 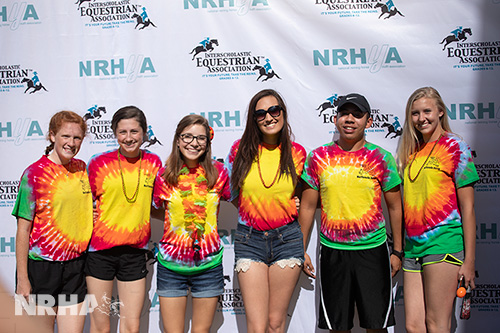 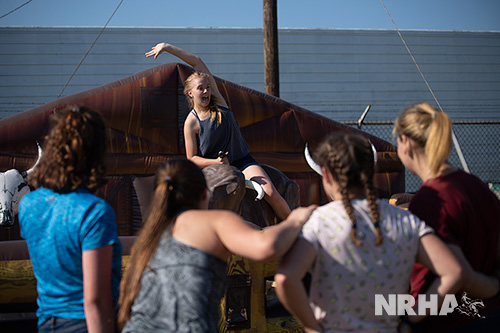 Immediately following the judging fundamentals meeting, the National Reining Horse Youth Association (NRHyA) hosted a fiesta themed party to welcome IEA to the 2018 NRHA Derby. There were many activities for the contestants, families and trainers to enjoy – ending in a night full of excitement! NRHyA had a mechanical bull, inflatable obstacle course, water slides, volleyball, sidewalk games, roping, a taco truck and ice cream. The party was well-attended and a great way to kick off the IEA Western National Finals!

During the NRHA Derby, the world’s best 4-, 5-, and 6-year-old reining horses and competitors come to Oklahoma City to compete for an estimated total purse and cash prizes of more than $1 million. For more information on schedules, live video coverage, hotel accommodations, sponsors and more visit nrhaderby.com.

For Immediate Release – Oklahoma City, Okla. – June 20, 2018 – The American Horse Publication’s (AHP) three-day conference was held June 14-16 in Hunt Valley, Maryland. During the annual conference, the award winners for the AHP Equine Media Awards were honored for their hard work and talents. This year’s competition for materials published in 2017 had over 800 entries. After the judging was complete, the National Reining Horse Association’s (NRHA) monthly publication, the NRHA Reiner, and the marketing department received multiple accolades.

“Our staff in Oklahoma City, and the contributing writers and designers, take a tremendous amount of pride in their work. They truly love the sport and bring that passion to the magazine and marketing efforts,” said Christa Morris-Stone, NRHA Chief Communications Officer & Assistant Commissioner. “In addition to those listed on the placings, I’d like to congratulate the entire team for a job well done!” 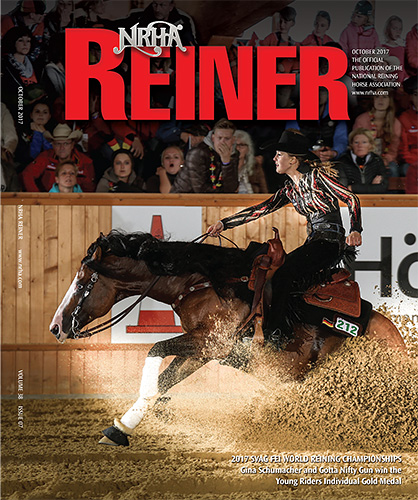 Judges’ Comments – “This cover sports a dramatic cover design. The action-packed photo with the horse and rider in sharp focus and the blurred, engaged crowd in the background is very narrative and impactful. The red of the masthead derived from the flecks of red in the rider’s shirt create a rhythm that draws the eye down and across the page. This is an exciting cover design that gives insight and support to the magazine content.” 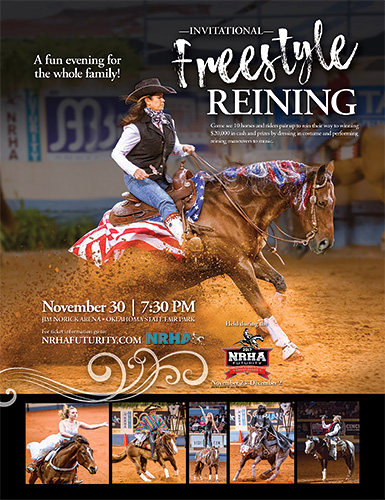 Judges’ Comments – “The photography in the ad carries you in with great impact. The negative space was well used for the copy placement.” 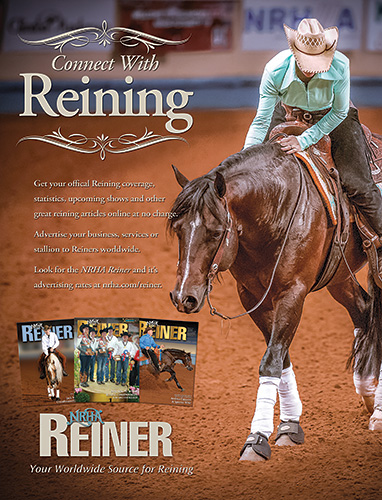 Judges’ Comments – “Strong consistent layout and the placement of copy is great.” 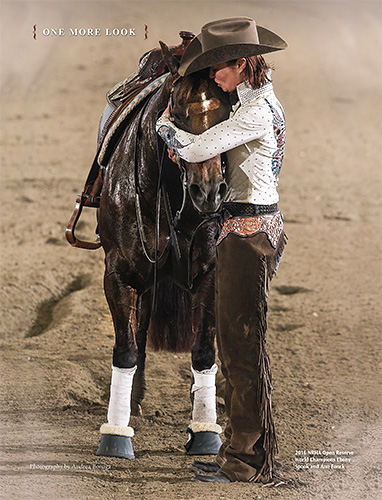 Judges’ Comments – “The emotion of this photo captures the viewer and holds them there. The tight composition almost makes the horse and rider appear as one. The limited palette of colors gives the appearance of a sepia tone photo, yet it is four color. All in all, a very inviting image.” 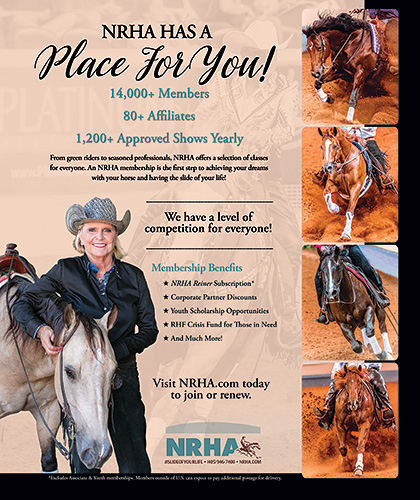 Judges’ Comments – “The images on the right side of the layout tell a great story and your special recognition is organized and pleasant to the eye.”