Columbus, OH – April 14, 2017 – From IEA Press Release: Following the Hunt Seat National Finals on June 30 through July 2 in Oklahoma City, OK, will be the 2017 IEA Western National Finals at Oklahoma State Fair Park. Nearly 200 of the nation’s leading middle school and high school western equestrians will have their chance to compete in team and individual competitions in western horsemanship and reining.

Gretchen Mathes will join McGauly in Oklahoma City. Mathes is the owner and manager of Powder Brook Farm, a large training facility located in Harwinton, Connecticut. She has been training, showing and raising Champion Quarter Horses at Powder Brook for 46 years.  Mathes has coached World and Congress Champions in both Youth and Amateur classes.  Mathes holds judge’s cards with AQHA, NRHA, NSBA, WCHA and has judged at every major show in the country. In 2007, she was named AQHA Horsewoman of the Year by the Professional Horseman’s Committee.  Mathes also serves on the Nominations and Credential Committee for AQHA and as the AQHA Director from Connecticut, Massachusetts, Rhode Island and is President of CQHA.

“These four judges bring an admirable level of expertise to the IEA Finals”, says IEA Executive Director, Roxane Durant. “Our riders will appreciate what an honor it is to show in front of them.”

Juanita June Weaver, 93, passed away on April 9, 2017. She was the beloved mother of NRHA Hall of Fame inductee and Past President Rick Weaver.

Information on the services and gatherings, as well as the opportunity to share memories and view the memorial video can be found on the Newcomer Funeral Home website. 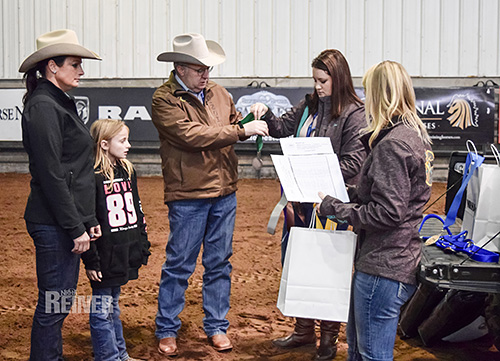 For Immediate Release – Oklahoma City, Okla., 4-6-2017 – Are you looking for a great way to gain hands-on experience in the equine industry? Would you like an opportunity to create relationships and network with some of the top professionals in the industry? The National Reining Horse Association (NRHA) is now accepting internship applications for the 2017 NRHA Derby held in Oklahoma City, Okla. Interns will gain experience working a high caliber horse show, all while networking with people in the reining industry. 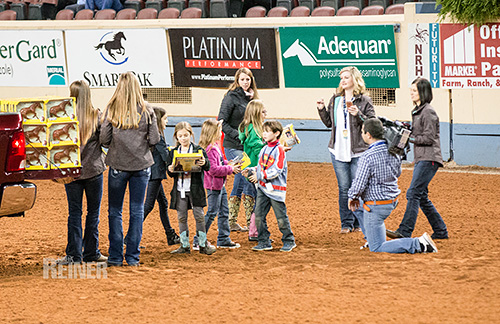 Internships with the NRHA provides workers with real-life experiences that create lifelong skill sets. Don’t believe us? Take it from a few former interns:

“The opportunities NRHA gives you with this internship are limitless. And the people you work with everyday turn into people you’d call family. It’s the whole reason I come back year after year.” – 2015 Futurity, 2016 Derby and Futurity Intern, Lane Miller

What are the requirements?
The internship is based at the NRHA headquarters in Oklahoma City, Okla., and includes participation at the NRHA Derby June 24 – July 2, 2017.

To be selected, candidates should meet the following criteria:

Is this a paid internship?
The internship is a stipend-based pay, depending on length of your internship (daily rate during NRHA owned event of $50/day, plus lodging and reimbursement for travel to and from show).

What do I need to include with my application?
A current resume and a list of references.

**NRHA is willing to assist in paperwork, allowing interns to receive college credit.

“We are so excited about the opportunity to connect beginning and Non Pro reiners with NRHA Professionals and affiliates in this new clinic series,” said Becky Jordan, RHF Board Secretary/Treasurer and chairperson of the Reining Boot Camp committee. “There is nowhere else where you can meet others who are learning and growing in this sport while also supporting a cause like the Dale Wilkinson Crisis Fund.”

Reining Boot Camps will build on the success of the Foundation’s former Rookie Days, which for 15 years served as the primary fundraiser for the Crisis Fund. The new program relies on affiliate volunteers to secure a venue, conduct the clinic and recruit NRHA Professionals to serve as volunteer clinicians. Additionally, some events plan to incorporate volunteer NRHA Judges to evaluate attendees when they perform the maneuvers of a basic reining pattern.

The one-day clinics are open to youth and adults. In addition to instruction time, the advance registration fee of $225 per adult and $125 per youth (18 and under) covers lunch. Registrants also can expect to be eligible for various prizes and discount offers. Advance registration is encouraged, and prices do increase $25 per person at the events.

Additional dates and locations are anticipated. A full schedule with details and registration information can be found at reiningfoundation.com/bootcamp. Affiliates interested in hosting a Reining Boot Camp event should contact the RHF office.

Cremona, April 1 – As the lights went out in the CremonaFiere Arena, the 2017 National Reining Horse Association (NRHA) European Open Futurity finalists wrote yet another page of history. It took a 222 or higher to make it in the final top ten Level (L)4 rankings and a 231 to claim the L4 Open Futurity Championship. 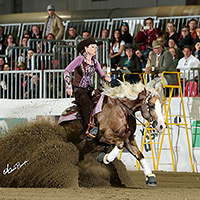 Draw 21 in a field of 25 finalists in the second section of the European Futurity Open finals, multiple past NRHA Open and Reserve Open World Champion Ann Fonck kept the reining fans in Cremona glued to their seats from the moment she burst in the pen riding Shiners Voodoo (Shiners Voodoo Dr x BR China Rose) for owner Kimberly Wegner. The show went on as Fonck and the flashy palomino performed fast and precise spins and controlled circles. The duo closed their run with three deep stops that set the dirt – and the +1’s – flying!

“I am thrilled and cannot believe how good my horse was for me tonight,” said Ann about the stallion she won both the German Breeders and French 3-year-old Futurity on last year. “I know how talented he is and when I rode in the pen I knew that he was capable of winning but I never thought that we would earn such a big score! I have to give credit to my husband, Bernard (Fonck) for helping me out during this week and to our incredible team that worked endless hours behind the scenes…I don’t know how they did it!”

Shiners Voodoo was bred by Patricia Blankeney Creson and nominated by Reto Erdin. Prior to the European Futurity, the talented stallion had already collected $12,198 to his name with Ann Fonck in the saddle. On Saturday night, he added $17,551 to his LTE. 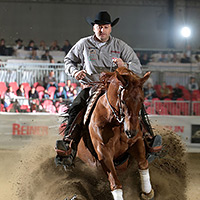 Early in the draw, NRHA Million Dollar Rider and multiple past NRHA Open World Champion Bernard Fonck had set the bar aboard Missedouttinseltown (Hollywoodstinseltown x Miss Sliding Peppy) owned by Golden Paint Ranch. The pair had set the stands on fire with their powerful run paid back by the judges with a 228.5 which earned them the reserve championship as well as $14.559. In the past edition of the Italian Reining Horse Association (IRHA) Futurity the sorrel stallion, with Fonck in the saddle, had tied for third place brining his earnings to $15,485. 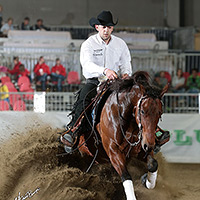 Past NRHA Intermediate Open World Champion Guglielmo Fontana topped both the L4 and L3 qualifiers riding Whiz Wild West (Spark N Whiz x West Coast Oak) owned by Luga Quarter Horses bred and nominated by Mattia Camisi. In the clean-slate finals, the bay gelding rode Fontana to a 226 and the L3 European Futurity Open title. “I don’t believe I’ve ever ridden a horse as talented as Whiz Wild West,” said the NRHA Professional following the awards presentation. “He was absolutely incredible tonight and it was an honor for me to place behind two incredible champions – Bernard and Ann Fonck – who I worked for for three years.” Fontana took home a paycheck worth $21,121 for his L3 win and for placing third in the L4.

Second place honors in this division with a 222.5 score went to Canadian NRHA Professional Morey Fisk, now based in Mooslargue France, riding Whiz My Freckles (Spooks Gotta Whiz x Dun Lost My Freckles), a mare owned by Peter Arnet, bred and nominated by Lewisville Development, LP. Fisk, who is a three-time NRHA European L4 Open Futurity champion, added $11,880 to his LTE amounting to $337,000 prior to coming to Cremona. 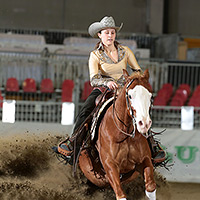 Winning the title in the L2 divison was Italian NRHA Professional Silvia Venezia who posted a 220 riding Gunnerine (Hollywood Gun Dunnit x E Harmony Dot Com), a mare owned bred and nominated by Teresa Rosati. “I’ve had this sweet mare in training since she was a 2-year-old and I broke and trained her myself,” said Venezia. “I am thrilled with how she performed tonight and even though I knew we could achieve this result, until it’s over you never know.” 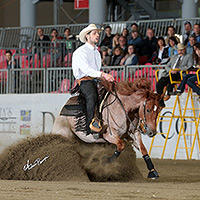 NRHA Professional Matteo Cuniglio rode RS Canaletto Jac (RS Great Jac Feona x RS Red Moon Olena), a mare owned bred and nominated by Claudio Risso, to first place honors in the L1 and to co-reserve honors in the L2 division. “I started riding this mare in December last year and immediately liked her,” said the Italian rider who won the L1 Open qualifier in Cremona. “We get along really well and she was good for me from day one. This is my first European Futurity title and I couldn’t be any happier.”

Earning the L1 European Open Futurity was German NRHA Professional Jeffrey-Thomas Touroute who made it back to the finals through the consolation riding Rowdys Smart Diamond (Hollywood Yankee Kid x GH Redskin Lady), a stallion owned bred and nominated by Hannes Kirchberger.

The NRHA European Futurity, held for the very first time in Italy after leaving the historical venue in Kreuth, Germany, after eight years, officially closed with the Open finals which showcased an incredibly high level of competition.

Though the competition in the arena is over and the 2017 champions are determined, the NRHA European Futurity Elite Stallion Auction will officially close on April 8 at 4 p.m. CEST.
Bid to breed to the industry’s best at www.32auctions.com/2017eurofuturitystallions

For complete information on the 2017 edition of the NRHA European Futurity visit nrhaeuropeanfuturity.com