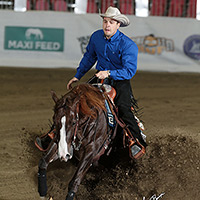 Cremona, March 31 – The National Reining Horse Association (NRHA) European Non Pro finals closed the day in Cremona, Italy. In a field of 32 finalists in the four levels, Anna Lisec of Austria had set the bar riding her Gunners Nite Slider (Gunners Special Nite x Wind Her Up Chic). Aboard the gelding bred by Oldenburg Farm LLC and nominated by Cardinal Hill Training Center LLC, Lisec closed her performance with a 217.5 to lead the Euro 36.000-added Level (L)4 Non Pro division. The young rider’s score held until the go-round leaders, Edoardo Bernardelli and RS Gaudi Jac, performed a penalty-free run and big stops closing their run with a 219. Bred and nominated by Claudio Risso, RS Gaudi Jac is by RS Great Jac Feona and out of RS Shadow Olena. “I got my horse when he was a yearling from Risso and I trained him myself,” said the young rider who was on the Italian team that took gold medal honors in the past FEI European Reining Championships held in Aachen, Germany. “I showed him last year at the German Breeders Futurity and at the Italian Futurity but we weren’t quite ready yet. In the last 6 months, he matured a lot and he was really easy to show here. I am very happy with this major win!”

Once the Non Pro finals were over, Anna Lisec – who boasts over $55,000 LTE – and Gunners Nite Slider settled for the L4 reserve championship. 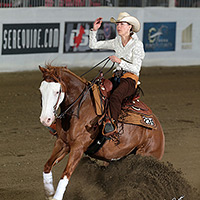 It was truly a special evening for Suzanne Scharroo of the Netherlands. Aboard her mare, My Private Gun, bred by Henk Hendrikse and nominated by herself, Scharroo went on to win the Euro 16.000-added L3 division with a 215.5. “I purchased this sweet mare when she was 6-weeks-old and trained her myself. I don’t usually break and train my horses but she is such an easy horse to work with. Achieving this result is truly incredible,” said Scharroo about her mare by Gunner and out of Private Enterprise who also slid to fourth place in the L4 division.

The reserve championship in the L3 division – with a 214 score – went to Jennifer Nixdorf and her Hollysmartin (Hollywoodstinseltown x Tarismartin), a mare bred and nominated by Marino Pilotto. The duo made it back to the L3 finals through the consolation run. 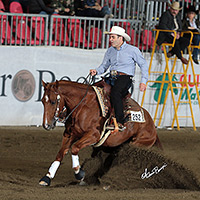 Winning the Euro 9.000-added European Non Pro L2 division with a 212.5 was Alex Kubli of Switzerland aboard his Gunna Ruf Ya, a stallion by NRHA Million Dollar Sire Gunnatrashya and out of Lil Ruf Lady. “I have to give credit to my trainer, Morey Fisk, who I’ve been riding with for the past 6 years, for having trained both my horse and myself,” said Kubli who tied to win the L2 qualifying go-round with his mount. “Winning my major event here is pretty special and, I must admit, my horse was very good to me all the way!” 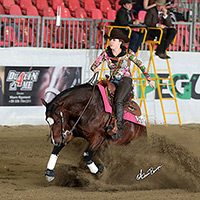 Winning the Euro 4.000-added Level 1 division of the NRHA European Non Pro Futurity with a 212 was Katharina Dejori with her Daicy between the reins. The mare, bred by Mauro Scotti and nominated by Filippo Masi, is by ARC Blueyed Redskin and out of Margaritaz. “I purchased her when she was a 2-year-old. I showed her a few times, with not much luck, and in the go-round here we weren’t that lucky but we were fortunate to make it to the finals,” said the rider from Sud Tirol. “I ride with Giovanni (Dido) Masi de Vargas, who has been riding my 9-year-old stallion for the past year, and who has helped me a great deal with Daicy. I am thrilled with this unexpected win!”

** Online ticket sales for the European Open Futurity Finals is closed. Tickets may be purchased directly for the CremonaFiere box office**

NRHA and the Reining Horse Foundation anticipate the scholarship may entice more students to be introduced to reining through the reined cow horse event. As part of the reined cow horse competition, contestants complete a reining pattern, commonly referred to as dry work.

FOR IMMEDIATE RELEASE – Oklahoma City, Okla. – March 27, 2017 – High school seniors who are members of the National Reining Horse Youth Association are encouraged to apply for scholarships made possible by the Reining Horse Foundation (RHF). Applications must be postmarked by May 1, 2017, for consideration. Seven academic and need-based scholarships will be awarded by an independent committee based upon applicants’ academic achievement, financial need, future goals and involvement with horses and NRHyA.

Chairman of the foundation’s Scholarship Committee is NRHA Vice President and Foundation Board member Mike Hancock. He said, “The foundation is committed to this scholarship program and what it means to our youth and their future. We appreciate every donor who makes the program possible through their support of fundraising efforts.”

For more information about the RHF Scholarship program, go to reiningfoundation.com or nrhya.com. You can call (405) 946-7400 to speak to NRHyA and RHF representatives about these programs.

Jacksonville, FL (March 24, 2017) – The sport of reining requires precision from horse and rider, impeccable footing, and safe, quality facilities, and that’s exactly what the Jacksonville Equestrian Center has to offer to the Florida Reining Horse Association (FHRA). In February, the Jacksonville Equestrian Center hosted the FRHA Florida Classic, and this coming weekend it will host a FRHA Florida Reining Horse Show. The FRHA has chosen to host all of their 2017 shows at the Jacksonville, Florida facility. After the most recent show held at the center, the FRHA couldn’t be happier with that decision.

“The recent FRHA show held at the Jacksonville Equestrian Center Award will go down as one of the most successful shows the club has put on, and we could not be more thrilled,” says Catherine Crandon, show manager for the FRHA. “The staff at the Jacksonville Equestrian Center is terrific. We had over 450 horses on the show grounds and an equal number of participants at the February show.”

“We chose the Jacksonville Equestrian Center because of the wonderful indoor coliseum, and the footing is especially great for our discipline,” says Crandon. Crandon also stated that the facility’s location was convenient for exhibitors and spectators traveling from the west and the north, inviting more participation.

At the FRHA Florida Classic, six days of competition at the Jacksonville Equestrian Center included the FRHA’s inaugural 777 Non Pro Challenge for older horses and non-professional riders, Para Reining, and short stirrup classes for the youngest reiners. Some of the top horses in the country also came to compete for their share of $30,000 added money in the Santa Hill Ranch Open Derby, which was won by Robin Schoeller of London, Ohio. “We had lots of great times at that show,” says Crandon. “Our Open and Non Pro derbies were just amazing this year and the competition was tough.”

Outside of the arena, the Jacksonville Equestrian Center’s friendly, relaxed atmosphere allows for exhibitors and owners to enjoy some shopping and concession stands between classes.

The Jacksonville Equestrian Center is a state-of-the-art equestrian facility on 80 acres, with a multi-purpose coliseum that features a 150’ x 300’ arena with plenty of seating for spectators. For exhibitors, the center features climate-controlled restrooms and showers, night security, many RV hook-up sites, well-kept footing, and close proximity to highways, hotels, and restaurants.

The FRHA is looking forward to hosting two more shows at the Jacksonville Equestrian Center this year, on March 25-26 and November 3-5. Everyone is invited to attend and there is no fee for spectators. To learn more about the sport of reining or the FRHA, please visit http://frha.com.

The Jacksonville Equestrian Center always welcomes associations that are looking for top-quality care and amenities for their horse shows, educational seminars, sporting events, or community events. To learn more about what the facility has to offer, or to request more information, please visit http://www.jaxequestriancenter.com.

Photo: Mark Rafacz from Ocala, Florida, riding for owners Peter and Courtney Morgan, won the 7up Open Derby at the FRHA Florida Classic at the Jacksonville Equestrian Center (Photo courtesy of FRHA – no photo credit necessary)

Cremona, March 27 – Long-standing Corporate Partner Markel Insurance has continued their support for over 20 years with NRHA. Known for providing immediate 24-hour “Fall of the Hammer” mortality coverage to sale consignments, Markel is proud to be a sponsor of the NRHA/Markel Insurance Futurity Sales, which include the Breeders Showcase Sale, Marketplace Sale and Futurity Prospect Sale. Markel has expanded to “Global Partner” status with going international in supporting the NRHA European Futurity, Derby and Affiliate Championships.

As the in-gate of the 2017 National Reining Horse Association (NRHA) European Open Futurity opens in Cremona, Italy with the qualifying go-round of the Open Futurity, amid the 100 plus horse-rider-combinations vying for the titles in the four levels, the following Markel sale graduates will be competing:

Markel, official insurance partner of NRHA, has over 50 years of expertise in insuring horses and horse-related businesses. As a leader in the horse insurance industry, Markel pioneered many of the equine coverages available today. Their insurance products include: Horse Mortality, Private Horse Owner Liability, Farm/Ranch Property and Commercial Equine Liability.