Riders vying for 2017 NRHA world championship titles and for a spot on their national team in Fédération Équestre International (FEI) CRI competition showed off their skills during the second day of the 2017 NRHA (National Reining Horse Association) Derby. 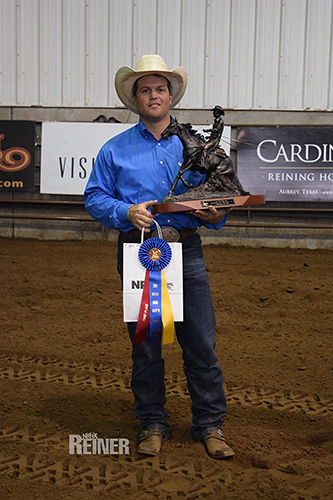 Casey Deary tops both the NRHA $6,000-added Open and USA Open classes and ties to win the FEI CRI3* with Mirjam Stillo

“She’s out of a cow horse mare [Smart Chic Aloha] that won close to $50,000 in the cow horse and was second at the World’s Greatest Horseman. We bought her from [NRHA Professional] Jamie Bissell for Todd Neiberger – who owns [the stallion] In Like Flinn – to show,” Deary explained. “I wanted something that would complement ‘Flinn’ really well, and this mare is bionic in ability, so I thought it would be a good cross on him. This was the first time I’ve ever tried to get a score on her and, if she’s going to let me show her like that and not stress her, I might have to use her a few more times!”

Deary says the mare’s watchful personality can make her difficult to read at times, but it hasn’t hindered her success in the arena.

“She’s got a lot of turn, a lot of stop and is a beautiful mare,” Deary said. “She’s a little looky—her ears are constantly going – so you don’t really know if she’s right where you want her to be. Todd [Neiberger] has done really well on her this year, and he was nice enough to let me steal her for the CRI here. Our goal was for me to use her to get qualified so I can show Flinn next year in FEI competition. That was her main job, but I schooled her at the Redbud and got her qualified for the AQHA World Show.” 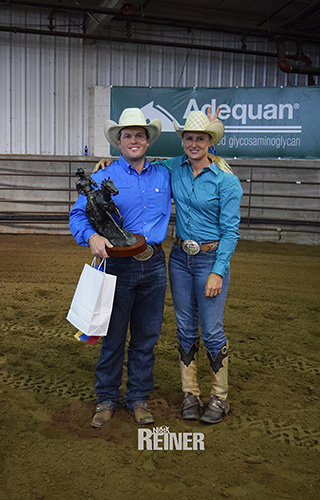 Casey Deary (USA) and Who Dat Hot Chic tied for first-place honors in the FEI CRI3* with Mirjam Stillo (ITA) and Ruff Spook (Smart Spook x Ruffle Me Up), a 8-year-old stallion owned by Shannon and Hershel Reid of Pilot Point, Texas.

“I only started riding him two months ago and we’re already qualified for the AQHA World Show. He is an amazing stallion, considering he hasn’t had a saddle on for the last two years since he was in the breeding barn,” Stillo said. “I called Shannon and told her I was trying to find a really nice horse to go to the FEI World Equestrian Games, so she gave me Ruff Spook and Ima Smokin Mister. Hopefully I can make her happy and make myself happy.”

Stillo added that she wanted to run him a little harder, but I didn’t want to overdo anything. “He had a stumble in the circles so I ran him harder to his first stop, and he was flawless,” added the Italian professional based in Pilot Point, Texas. “His stops and rollbacks are amazing. There’s a little more horse in there, but I was happy that the first time he gets back to the pen he wins a check and posts such a great score.” 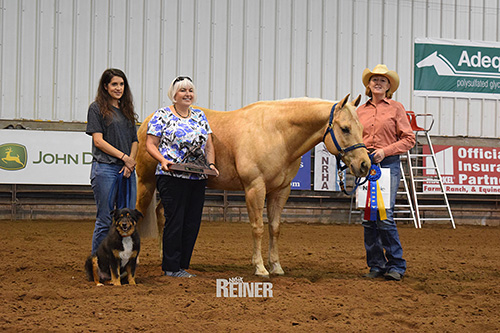 “We just wanted to make a nice clean run and mark a good score in the CRI and ended up winning the Intermediate Open as well,” said the native Australian rider who trains out of Sterling Ranch USA, Pilot Point, Texas. 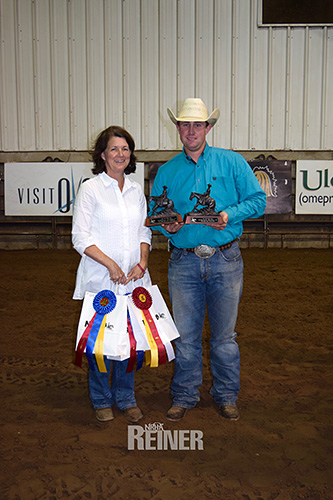 A half-a-point behind the winner, NRHA Professional Josh Tishman reined Chics Love Me Wimpy (Wimpys Little Step x Dream About Magic) to reserve honors in the Intermediate and to top honors in both the $500-added Limited Open and the $500-added Rookie Professional. The Deary Performance Horses trainer rode the 2010 gelding for owner DAG Ventures LLC of Dallas, Texas.

“He’s really consistent and easy to show—he actually didn’t get here until late last night. I got on, went in and showed. We’ve won everything I’ve shown him in this year,” Tishman said. “We’re leading the Rookie Pro and Limited Open rankings, and I am really excited about hauling for the NRHA World titles. We purchased him for his owner Deborah Good from NRHA Million Dollar Rider Mike McEntire last year. Unfortunately, he was injured shortly before the Derby, but once he was better and we put him back in training, we realized he was enough for an open horse.”

Good, who rides with Deary and Tishman, says the gelding is an incredible horse because of his ability to adjust to his rider in the pen.

“He’s a non pro horse, and I’m a green and rookie rider just coming up. Casey and Josh have taken me a long way this year, so it’s great to have a horse at the level of a consistently open rider and then come back to the level I’m at,” said Good who started riding five years ago. “He’s honest in the arena and is a wonderful horse to show. I showed for the first time three years ago and got hooked. I love that I have a horse that constantly takes care of me and Josh.”

Ending the day at the Oklahoma State Fair Park were the AQHA and APHA Open and Amateur classes.