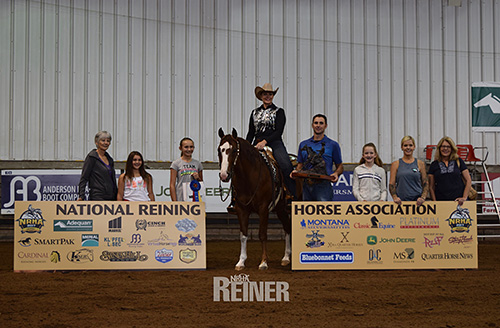 “[My run] was pretty good,” Wigen said. “He ran in and stopped well for me, turned good, circled good, and I knew if I could nail my stops, I’d probably be in a good position to win.”

Melissa’s accomplishments in the show pen are remarkable considering that not long ago she had a devastating horse accident, which resulted in multiple surgeries. Only three months ago, Melissa was in surgery once again. Not only has she had to recover physically, but she has had to regain her self-confidence. Her horse, Dunit In Wranglers, has given Melissa that confidence, and she is so very grateful. “I have a nice horse, and I am thankful everything came together,” states Wigen, who is married to NRHA Professional Travis Wigen.

“I haven’t shown for 16 years,” Donahue said. “I had some time this year, so I decided to go back to the show pen. I purchased my mare from (NRHA Million Dollar Rider) Jose Vazquez a few years ago and, after a three-year-period in the pasture living the broodmare life, I started riding her in January. Plans are to show her through the rest of the year and then breed her to Not Ruf At All.”

Donahue trains his own horses and rides at Zimmerman Performance Horses Rogersville, Missouri. Donahue’s 2009 sorrel mare was supposed to be a broodmare until Donahue decided to bring her back into the show pen.

With Smart Dundee (Conquistador Whiz x Smart Oaklyn) between the reins, Cathy Brant won the $500-added Limited Non Pro with a 140, while Paul Queen scored a 138.5 to take reserve honors aboard Outta Dough, owned by Dorothy Queen. “My horse is incredible,” Brant said about her 7-year-old gelding. “My husband, (NRHA Professional) Brandon Brant, showed him in the 2010 NRHA Futurity. Following an injury, my horse wasn’t shown for two years, after which I picked up the reins. We tied to win the NRHA 7&Up Level 4 and Level 2 Non Pro class offered at the Buckeye Reiners Easter Slide, and now here we are!”

Ann Admonius and her own Gunners Genes (Gunner x Taris Designer Genes) paid another trip to the winner’s circle in the Prime Time Non Pro with a score of 139.

“I had so much fun today,” Admonius exclaimed. “This is a new horse for me, so we’re still getting acquainted with each other. I just had a ball!”
A string of unfortunate events delayed Admonius and the 2012 gelding’s progress toward the show ring, and this class was only the pair’s second time showing.

Admonius is now focused on enjoying her horse as they progress as a team.

“[My plans are] to get better,” said Admonius, who also took the reserve championship in the NRHA Intermediate Non Pro. “I love him! He’s just the sweetest horse.” 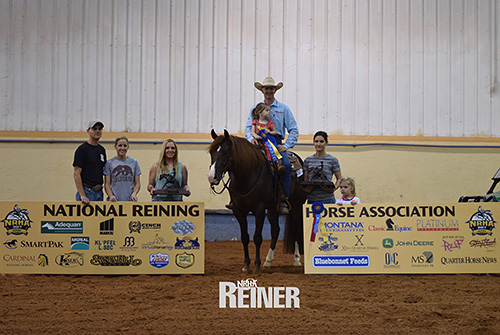 “He went in and turned for me both ways, and after I felt him take a big deep breath, I knew he was focused,” Piper said of the winning performance. “He circled right with me and had some pretty stops. I didn’t want to over-show him; I wanted to go out there and half every maneuver and see what he’d do for me.”

“I had him when he was younger, then sold him, and recently got him back. I brought him here to see what he was like, and hopefully I’ll be able to get him ready for Tulsa,” Piper said. “I knew he was a neat and talented horse, but since I’ve had him back, I’m surprised at how physical he is in his stops. I think he’s matured both physically and mentally since his early days in training.”

NRHA Professional Patrice St-Onge of Gainesville, Texas, earned the reserve championship in both classes with a score of 145 riding Smart Cowboy Whiz (Who Whiz It x Little Smart), owned by Cowboy Partners.