In a field of 219 horse and riders entered in the $181,000-added 2017 NRHA (National Reining Horse Association) Derby, posting the top score in the Level (L) 4, was Dr. William ‘Bill’ Rhoads of Whitesboro, Texas riding Mega Maggie Mae. Aboard the 5-year-old mare by NRHA Four Million Dollar Sire and NRHA Hall of Fame inductee Magnum Chic Dream and out of Cinco De Mega – nominated by Martin Bonneson – Rhoads posted an outstanding 223.5 in the second section of the qualifier. “My mare is amazing, and this is the highest score we’ve ever posted together,” said Rhoads about his mount, with whom he slid to the 2015 NRHA Futurity Levels 3, 2 and 1 as well as the 2016 NRHA Level 4 Non Derby Championship. “What did we do to get ready for today? We simply kept her happy and jogged her every day!” Mega Maggie Mae boasts $119.000 NRHA LTE.

David McBurney and his Fancy Steppin Whiz, a 5-year-old stallion by RC Fancy Step out of TC West Coast Wendi (nominated by McBurney), took the lead in the L3 division of the Non Pro Derby with a 218 in the first go of the first section held on Monday. McBurney had set the bar, and in the second section, Chloe Lawrence tied to win the L3 division with a 218 and topped the L2 and L1 Non Pro divisions aboard the Lawrence Ranch owned 6-year-old mare, Whiskymakesmefrisky (Topsail Whiz x DN Smart Snap). McBurney held on to the lead in the Prime Time Division. 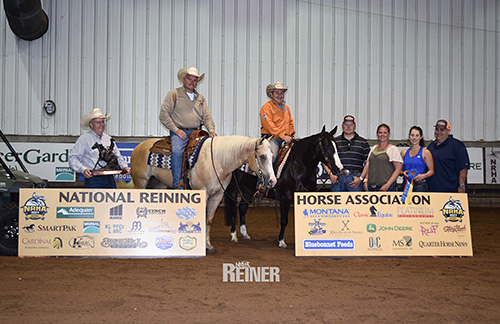 Brian Welman and Dany Tremblay both marked scores of 146 to earn $822 and tie for championship honors in the Novice Horse Open Level 2 class.

Welman rode Cielo Dreaming (Magnum Chic Dream x Shiney Cielo), a horse he’s ridden for about a year, owned by Craig Vernon. The gelding came from Calcagnini Reining Horses in Pilot Point, Texas, and has found a successful show home with the Vernon family, who train with Welman in Hastings, Minnesota.

“I bought him for Paige Vernon as a 4-year-old from NRHA Professional Stefano Calcagnini, and he’s a 5-year-old now. She’s gotten along with him pretty well. She hasn’t shown him at many majors; she’s mainly showing him up where we’re from,” Welman said. “They’ve gotten along really well, so we’re just trying to get him pretty solid. He was good today. He was okay the first day, not quite as nice as he can be. Today, he was a lot better.”

Overbrook, Oklahoma-based NRHA Professional Dany Tremblay piloted Misters Temptress (Mister Dual Pep x Colonel Pepinic) to tie for the win. Adh-Mor Ranch owns the 2012 mare, and Tremblay says she has really started to come into her own in the show pen this year.

“I rode her last year and had a few good horse shows. This year, she just keeps going—showing, showing and showing. She knows she’s in the pen, actually,” Tremblay said. “I’m leading the NRHA Top Ten Novice Horse Open Level 2 rankings right now, so hopefully we’ll stay in the lead until the end.”

The mare has a strong personality that adds to her performances. Despite being a little out of shape after a two-month break, Tremblay says she still gave her all in the class. Tremblay plans to continue gunning for the NRHA World Championship in his division by entering as many novice horse classes as he can.

“She’s kind of like my little pet—I bring her everywhere,” Tremblay said. 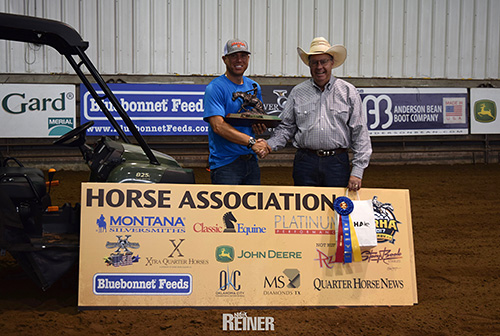 Matthew Palmer and Gunner Be A Maverick (Gunner x Dun It Preciously) earned third-place honors in the Level 2 with a 145 – for $497 – in addition to winning the Level 1 class, adding an extra $589 to his earnings. The gelding, owned by Mark Hurd, was purchased for his daughter Elena Hurd to have a mount to get qualified for the SVAG FEI™ World Championships for Juniors and Young Riders in Switzerland.

“Before the NRBC, Mark came to me and wanted his daughter Elena to have a horse to try [to get qualified],” Palmer said. “He only had one horse over 7 years of age, which is CC Enterprise, and he wanted to give his older daughter a chance because she’s 21, and this’ll be her last year to show in the Young Riders competition. He said to go out and ‘find me a horse if you can’.”

Palmer found Gunner Be A Maverick, a 7-year-old mount with a very limited show record through NRHA Three Million Dollar Rider Craig Schmersal. With some tuning and miles, Gunner Be A Maverick has already won at the only two shows Palmer has entered him so far.

“I do a lot of business with Craig and Ginger [Schmersal], and they really take care of me, and they had this horse that had only been shown three times his whole life,” Palmer explained. “Before we got him, he won $200. An older lady had him and trail rode and showed a little bit, nothing serious. Next thing you know, we bought him and I took him to the Carolina Classic and marked a 145.5 there, and he won both the Novice Horse Level 1 and Level 2. He went from $200 in earnings to $1,000 in earnings in a day. [The NRHA Derby show] is only the second time I’ve ever shown him, and the two times I’ve shown him he’s won.”

Palmer will hand the reins to Elena Hurd for the youth classes during derby week and plans to show the gelding himself in a CRI qualifier for the World Equestrian Games (WEG) in New Jersey next week.