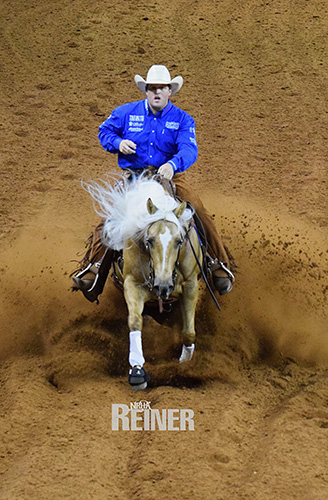 Once Shesouttayourleague, a 5-year-old mare by NRHA Million Dollar Sire Walla Walla Whiz and out of NRHA Hall of Famer Wimpys Little Chic (by Wimpys Little Step), nominated by Arcese Quarter Horses USA and owned by Curtis Performance Horses LLC., entered the arena, she gave the Weatherford, Texas trainer all she had. Once the flashy palomino, who had $184,723 NRHA LTE prior to showing in OKC, closed her pattern #12, a 229 appeared on the score board. The title was hers.

“To me, this is nothing short of a miracle,” said Deary following the awards presentation. “At the NRBC she was giving me trouble so, for her to come as far as she did – and I give my friend Jordan Larson the credit for helping me out at the Redbud Spectacular – it was a night and day difference for my horse. I came right after Larson tonight, and I had absolutely no anxiety about having to beat his run because their performance was amazing. I was sitting there cheering on him as I was waiting for my turn. I came in through those gates telling my mare ‘just be as good as you can be and give me what you’ve got’. She did just that, and I cannot be any more thankful for this title tonight.”

Shesouttayourleague gave Deary all she had and more: the pair added another $60,000 to their earnings for the Open Derby Championship.

Larson and ARC Gunnabeabigstar, a 6-year-old stallion by NRHA Million Dollar Sire Gunnatrashya and out of Wimpys Little Chic, is owned by HDC Quarter Horses and nominated by Arcese Quarter Horses USA. The duo added $43,918 to their earnings. “I called on him for everything he had, and he delivered,” said Larson. “[NRHA Million Dollar Rider] Brian Bell helped me with his turn-arounds, which could well be why he turned so fast, and I had a hard time controlling him, but I have to thank Brian for that. Wimpys Little Chic is the epitome of a great reining horse and what she is doing as a producer is incredible!” ARC Gunnabeabigstar is an NRHA Markel Insurance Futurity Sales graduate.

“The owners brought her to me about 6-7 months ago, and we started schooling her,” said Tremblay. “I thought she was going to do so well. We came here after the NRBC with big expectations, and there you go, champion L3. I really felt like she was ready to go. I just turned up the volume a little on her and she gave me everything she had.”

“We haven’t been together for very long,” said head trainer for Xtra Quarter Horses, Brazilian Boechat, based in the USA. “I got him after the NRBC. Jordan Larson had him before me and did a great job. [NRHA Million Dollar Rider] Brian Bell had him before Jordan, and I’ve been the lucky one to get to show him here. He’s been in great hands, and people did a great job with him. I think he has it all; he’s a big turner, big stopper, great mover, and has a great mind. I couldn’t ask for anything better.” 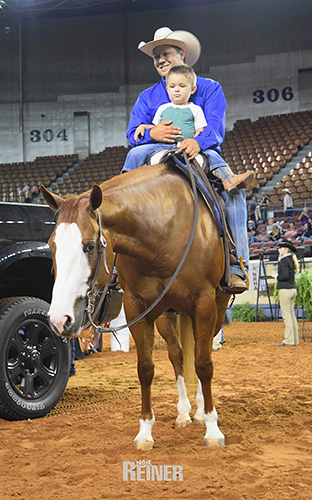 Bobby Avila, Jr. and CBK Spooks Got Cash (Spooks Gotta Gun x JR Wright On Cash), owned and nominated by William and Corliss Kellogg, rode to a 221 and a $9,839.95 check in the first section of the Open finals. “She’s a horse that was trained by Josh Murphy and is actually in training with him,” said Avila, Jr. about the 5-year-old mare. “I’ve been riding her the last few months for Josh, since we train out of the same barn at Zimmerman Performance Horses, and I’ve been showing her because I’m eligible for lower levels. We’ve won the last three derbies on her; we won the Buckeye Reining Classic in the Novice Derby and the Red Dirt Derby.

She’s a very honest, very consistent horse, and it feels awesome. It’s a lot of hard work, but it’s a team effort, and that’s what makes this special.”

Tom Foran, who also qualified his mount Walla Walla Starbuck for the L3 division where they closed in 6th place, earning $8,368.49, left the arena with a 220 – enough to clinch the reserve championship, leaving Avila, Jr. in the lead. The 5-year-old stallion, owned by Sleipner LLC., who was nominated by Marc Gordon, earned another $7,778.97 for their L1 reserve title.

Barak Gibori rode Shina Gun, a 5-year-old stallion by Gunner and out of Shiner Light, owned by Teresa Wynn and nominated by Xtra Quarter Horses LLC., to top honors in the L1 Open Derby. The NRHA Professional who works out of McQuay Stables Tioga, Texas, posted a 219.5 for the win.

“It has been a long process, and I need to say a lot of things to the owner for trusting us because we were really close to making it to the winner’s circle, yet every time we had a little bobble here and a little bobble there, and she kept sending us to the horse shows. It worked,” said Gibori. “In the finals tonight, I just let him do his job. That’s about it. He’s a really talented horse, we worked hard to get here, and as soon as you run through that gate, it’s just about letting them do what they know how to do.” 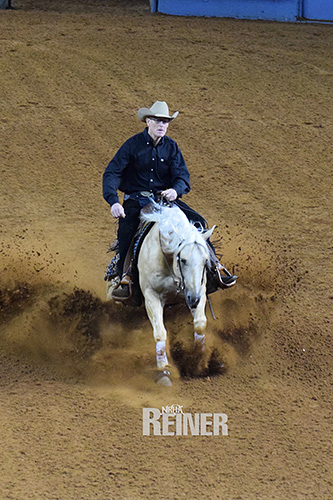 Martin Larcombe and Hang Ten And Shine (Hang Ten Surprize x Ebony Shines), a 6-year-old stallion nominated by Rosanne Sternberg, kept their perfect derby record alive by qualifying for every Level 4 finals at the major events, so it was an added bonus when the pair won the Prime Time Open Derby division with a score of 221.5 for owner Christine Brazeau of England.
“He’s been a very good, consistent horse,” says Larcombe, who collected a paycheck worth $2,070.64 for the win and added another $6,579.23 for placing 13th in the L4 Open finals. “He has made the Level 4 finals at every big event we’ve been to. That’s a pretty good achievement for a young horse.”

NRHA would like to thank all the supportive Corporate Partners and Event Sponsors for making our Derby awards outstanding this year!